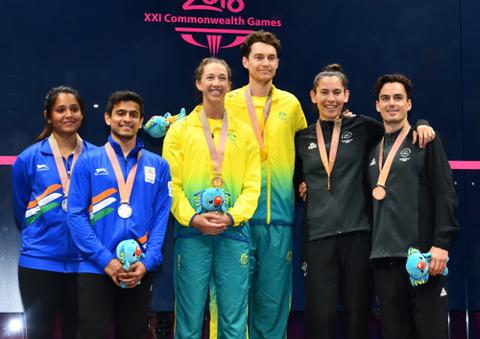 Donna Urquhart & Cameron Pilley, an Aussie pairing that has only been together for eight months, claimed Commonwealth Games Squash gold after winning the Mixed Doubles final in straight games in front of a capacity and partisan crowd at Oxenford Studios in Gold Coast - thus keeping the event's gold medal in Australian hands for the fourth time since 2006.

The fourth seeds made their breakthrough in the semi-finals when they despatched second-seeded English pair Alison Waters & Daryl Selby. Their opponents in the final also pulled off a semi-final upset - Dipika Pallikal Karthik & Saurav Ghosal, an Indian pairing celebrating their second successive partnership in the Commonwealth Games, surviving a dramatic third game tie-break against the event favourites.

But, buoyed by the crowd, Urquhart & Pilley - first cousins who hail from Yamba in New South Wales - defeated the Indians 11-8, 11-10 in 31 minutes to claim the first squash medal for the hosts on Gold Coast.

"It feels amazing," said Pilley, who now becomes the first player to win three Commonwealth Games Doubles gold medals. "It won't sink in until we're standing on the podium and watching the flag go up - that'll probably get the waterworks going.

"Every other gold I've won is so special. But to play in front of such a great Aussie crowd is something we never get the opportunity to do. I've got about ten family from Denmark who've come over and we've both got a massive group from Yamba that came up.

"So to do it in front of all your friends and family who never get to see you play - and we walk away with a gold medal - it makes it even better!"

Urquhart interjected: "It's not just that - but having this capacity crowd cheering for us is very special. It's so good for squash - I hope everybody loved it.

"We might never get another opportunity to play in front of a crowd that big, where they're all cheering for us.

When asked about the partnership, Pilley replied: "We only played with each for the first time in August, and teamed up for the world champs in England."

Urquhart, who won a Women's Doubles bronze eight years ago in Delhi, added: "It's my first gold medal. I always imagined what it would be like getting gold - it's always been a dream of mine, so it's going to be difficult now to realise it's actually happened!"

"After yesterday's disappointment we wanted to make sure that we came out here and lifted the team - and I think we put together probably one of our best performances, to be honest," said King, the women's individual gold medallist who is now sure of the three Gold Coast Games medals.

"It's been a tough two weeks and we've played every single day - it's a long stretch. But I'm super proud of our effort today."

Coll who was clearly distraught after their semi-final defeat, was upbeat about their play-off success. "I was on the floor 24 hours ago, but I've got a champion partner and she picked me up. I've got fire in my belly to help her out today - she's a real inspiration to me. To get a bronze - not the colour we wanted - is a great feeling.

"We're guaranteed four medals, and I think it's the most we've ever got. We had high expectations coming here - we've got a wicked support team."

Contrasting semi-finals in both the Men's and Women's events produced unexpected finals. An all-English men's match went the full distance before seventh seeds Daryl Selby & Adrian Waller prevailed over No.4 seeds Declan James & James Willstrop 11-9, 9-11, 11-10 in 86 minutes - fighting back from 10-7 down in the decider, then winning the 'sudden death' point on a 'no let'.

"Playing your team-mates is really difficult," said Selby. "We play and train with each other the whole time - it's been a year's preparation - and to come up against them in the semis is tough. They're obviously a great pair. You feel for them.

"But on a selfish note, this is my last chance to get in a final. It's been a great partnership. I'm just so happy that we've managed to do it."

Australians Zac Alexander & David Palmer came through the other semi, beating second-seeded Scots Alan Clyne & Greg Lobban 11-8, 11-5 in 30 minutes. The win will extend Palmer's record as the most prolific Games medallist in squash - and will give the New South Welshman the chance to retain the event's gold medal he won in 2014 with Pilley.

"It was important to get that first game," said Pallikal after the win which ensures that India will take home two Games medals in the sport for the first time. "We played really well in the second to keep that momentum going.

"We fully enjoyed being out there today and I think it showed. Sometimes when you're playing doubles you forget that your singles game works the best when you're on a doubles court. Saurav keeps telling me to play to my best advantage."

Chinappa added: "To be honest when we won the gold last time I never fully appreciated it. Coming back this year, the competition is so tough. It means a lot to me - the girls are so tough."