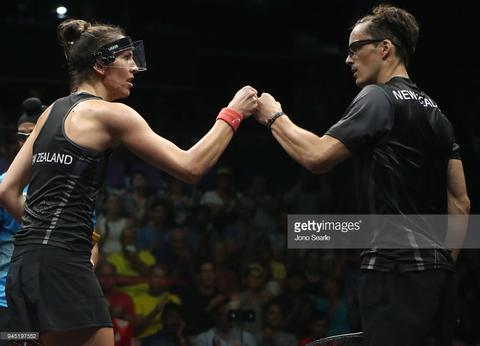 Three matches in a day for three wins as men's singles silver medallist, Paul Coll continued his progress in both mixed doubles and men's doubles at the Commonwealth Games.

Coll and Joelle King scored an easy win over a Barbados pair in the last 16 in the morning and then a tough straight game victory in the quarters over Indian eighth seeds Joshna Chinappa and Harinder Pal Sandhu 11-10, 11-10 in 33 minutes.

"We had a good lead and they (Chinappa and Pal Sandhu) were playing well, we still did the right thing, there was a few lucky shots, but we came through. We knew they were going to be tough. I think any of the teams left are going to be difficult," said King. The same Indian pair had earlier defeated Amanda Landers-Murphy in three games in their round of 16 contest.

"They are another top pair with a similar sort of play, they like to attack and hit the ball hard and fast, We'll have to bring our 'A' game. I have a lot of faith in my partner," said King, while Coll was typically understated "I think we played well to get it done it two, we are very happy."

In the men's doubles Coll combined with Campbell Grayson to defeat the Pakistan team of Tayyab Aslam and Farhan Zaman to make the last eight against the experienced Aussie duo of Zac Alexander and David Palmer at 8.15pm local time (10.15pm NZT) on the show court.

"The Aussies will be tough and are a good team, it will be a good match. I think we played well to beat the Pakistanis, they were quite a skilled team. Of the six points they got in the second game, I think all of them were from winners. Once we got going I was happy with the way we played," said

In women's doubles King and Landers-Murphy start Friday with a quarter-final at 11am (1pm NZT) against the second seeded English pair of Jenny Duncalf and Alison Waters who they beat in the final to win the women's doubles world title in Manchester last year. The reasoning for the lopsided draw came about as a result of the Kiwis losing their first doubles group match to a Malaysian pair, however King doesn't appear too phased.

"It's happened. That's the way it is. We're kind of relaxed. We'll try and play as well as we can. It will be tough, they're obviously a good pair and will want it as much as we do," said King.

In men's doubles Lance Beddoes and Evan Williams won their second group game as they accounted for St Vincent & the Grenadines Omari Wilson and Othniel Bailey 11-4 11-7. However they were soundly beaten by seventh seeds Daryl Selby and Adrian Waller from England 11-1, 11-3, in the round of 16. at 8.30pm local time on a back court.

Full schedule for the Quarters of the Mens and Womens and the Semis of the Mixed is below: 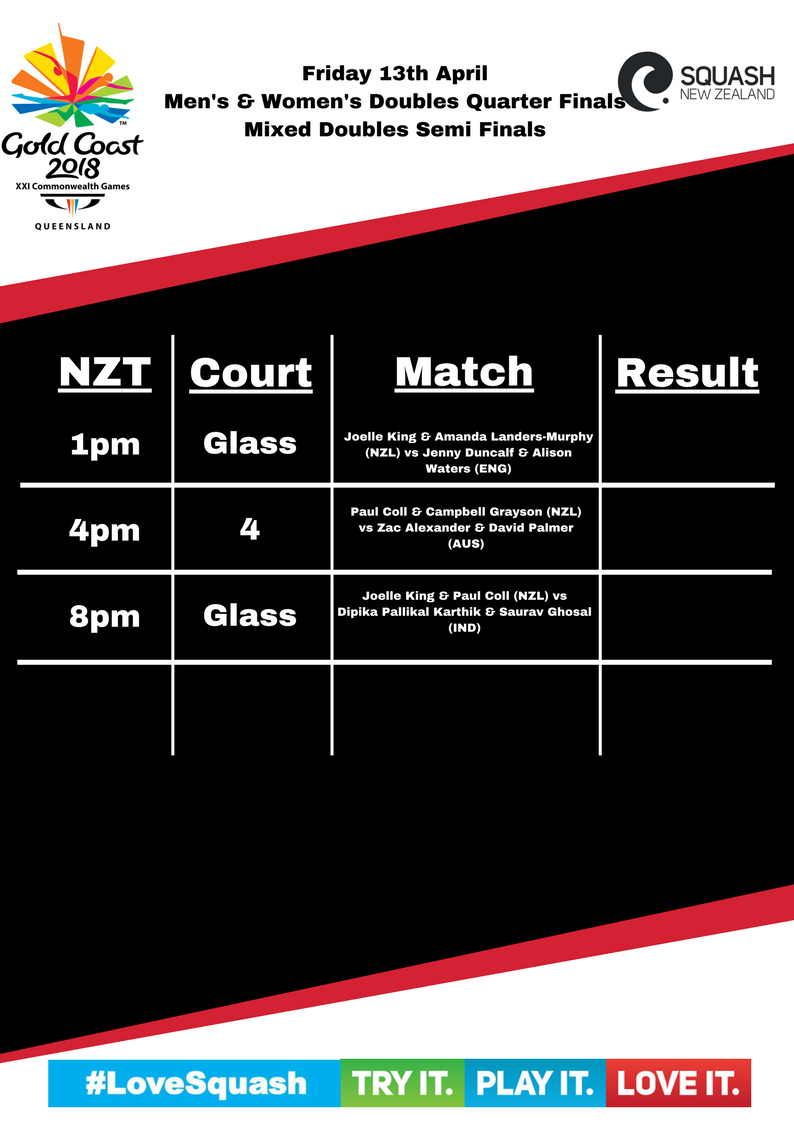