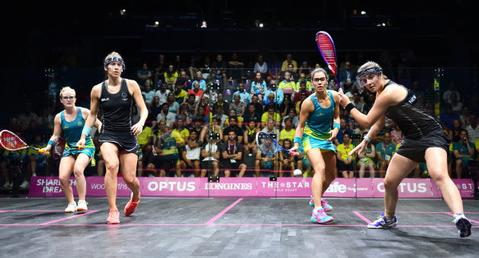 After a day two count of 30 pool matches spread across five courts, Commonwealth Games Squash action moves into the knockout stages on Thursday in the Women's and Mixed Doubles at Oxenford Studios in Gold Coast, Australia.

A crucial encounter in the Women's event opened proceeding on the all-glass showcourt where top-seeded New Zealanders Joelle King & Amanda Landers-Murphy faced Aussie pair Sarah Cardwell & Christine Nunn, the No.8 seeds, in a match which the Kiwi world champions - after losing in Monday's first pool match - had to win in order to progress to the knockout stage.

With King, the newly-crowned Commonwealth singles gold medallist, now in the 'doubles zone', the favourites took just 21 minutes to see off the home duo 11-8, 11-6.

"If we lost, we were definitely out," conceded King afterwards. "I guess we just wanted to come back and try and play better than we did yesterday - it was a pretty poor start from myself. I had the afternoon off yesterday and was able to recover a bit more.

"Doubles is one of those games where it takes a little bit to gell - especially when you've been playing singles and you've got to try and switch over. And we certainly gelled a lot better in that game."

Was it difficult to come down from Monday's high of gold medal success? "Yes," said King. "Not much sleep and all that - but we're professionals and that's what we've got to do.

"I was disappointed with the way I played yesterday - it wasn't good. I had to come back today and restart my doubles campaign. So hopefully we can move forward out of the round robin then see what else we can do."

Partner Landers-Murphy said: "It's a team effort - both of us were out there and we just didn't perform as we wanted to. Today we had to come out and prove that we can play better.

When asked how she was handling playing both doubles events, with different partners, King explained: "Playing match after match is not so bad, we train to switch over pretty quickly. I just didn't expect as big a come-down from the singles. That was probably the hardest part of it. Transitioning was easy because we all know each other really well, we know what's working. But it's been a long week already.

"We've just started the doubles and we all agree it was probably our worst performance ever yesterday. But we've got nothing to lose. Sometimes when you have a loss it sparks you on a bit. I guess we're going to muck up the draw - which we've done many times. In the world doubles, Paul and I lost as well in our pool and ended up actually going through and winning!"

Later in the day, the Kiwi pair's surprise first day victors Rachel Arnold & Sivasangari Subramaniam, the 9th seeds from Malaysia, completed a second successive upset win by fighting back from a game down to beat Cardwell & Nunn 10-11, 11-6, 11-5 - thereby topping Pool A, ahead of fellow qualifiers King & Landers-Murphy.

"We're very excited," said Arnold. "It's our first tournament together - and it's in the Commonwealth so I'm very happy with our performance. After yesterday, it was important for us to get a win today as well and not just slow down."

Event debutante Subramaniam, still only 19, said: "It was a really good win for us, yesterday and today, to make it to the quarters as ninth seeds! It was a very good win, but it's not over yet!"

New Zealander Paul Coll was also rapidly adjusting to doubles play after battling to silver in the men's individual final less than two days earlier. His first of the day's two matches was a men's fixture in which he partnered Campbell Grayson to an 11-4, 11-10 victory over Maltese pair Bradley Hindle & Daniel Zammit-Lewis.

How easy was the change from singles? "It's not easy, you've got to be pretty switched on," said the world No.9. "Yesterday morning was tough, today is a lot better. Campbell carried me yesterday, made it easy for me. But we've got a great team from New Zealand, physios, etc, who take wonderful care of us. Body's feeling good."

His partner agreed: "He's come from such a high, the emotion and everything - and doubles is a lot different as well, and I've had the opportunity to play for the last couple of days. I've just got to try and look after him and help him when I need to."

Grayson responded instantly: "Yes, they call him Superman - but I'm going for the Superman role now!"

Coll continued: "Since the individuals started I haven't had time to play any doubles - but it comes back pretty quickly. One or two matches and it clicks pretty well - and we've got our communication sorted out which is key to us, we trust each other.

"Malta came out firing in the second game and got an early lead. We had to talk about our tactics and find a solution, which we did. And from 8-3 down we won 11-10. Yes, that was tough."

Two English pairs vying for a places in the Women's quarter-finals were placed in the same qualifying pool - and in the morning faced each other.

Was it difficult playing their team-mates? "It's obviously a very different dynamic to playing other countries, but in individuals we play each other all the time, so we're kind of used to it," said Duncalf, a former world No.2. "But, in a funny way, being in the same group could be good for us if we both get through - so then we won't play each other in the knockout stages so soon.

"But we played so much, in the summer and just recently before we left. We knew what we wanted to do and were quietly confident - we thought we could do well."

The No.2 seeds got off to a strong start on Tuesday by beating Scots Lisa Aitken & Alison Thomson. On that match, Waters added: "It helped us having that match yesterday - it was a good match against the Scots and it got us into our flow and we came out really strong in that first one."

Replying to a question about the number of matches players are playing in these early days, Duncalf said: "I enjoy it - we've both got three today, we're both playing the mixed and women's - the more I'm on court, the happier I am. The mixed is so tough, it sharpens me up for the women's as well. I love being on court. I didn't play the individuals so it's exciting getting a piece of the action!"

Perry, the singles silver medallist, was emphatic: "The singles are completely out of my head - I had yesterday to get into the doubles. We just wanted to go on there and get the job done."

Massaro admitted: "We knew there was a lot of pressure on us and we weren't happy with our performance this morning. They won a silver medal at the world doubles, we practise with them a lot and we know how good they are.

"Even though we weren't that happy with our match this morning, we thought it would help us for tonight - and I think it did. We knew our backs were against the wall. I said to SJ after the second, if we lose this we go down with no regrets.

"We're two quality performers under pressure - in fact that might have been the difference in the end as we back ourselves to be able to perform under a huge amount of pressure - being one-nil down - and hold it together. That wasn't our best squash but it's what makes me proud that we can come through when we're not playing our best squash."