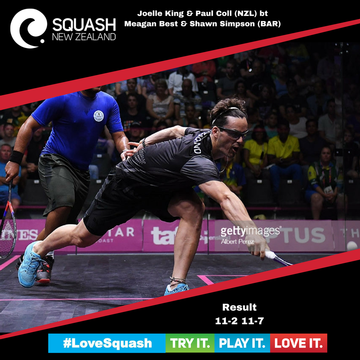 Mixed results for New Zealand's squash combinations in the morning session of day three of the doubles.

Kiwi top seeds Joelle King and Paul Coll took on the Barbados team of Meagan Best and Shawn Best in the round of 16 mixed and duly ran away the winners 11-2, 11-7 to cement their place in this evenings quarter-finals.

"It was two players we didn't know much about today. We are starting to gel better and better as a combination," said singles gold medal winner King.

"I've got two more to play today. Luckily we've got a great team (physio's) back at the village. A big shout out to them," said singles silver medal winner, Coll.

In men's doubles Lance Beddoes and Evan Williams won their second group game as they accounted for St Vincent & the Grenadines Omari Wilson and Othniel Bailey 11-4 11-7. They move into the round of 16 where they'll have the tough task of playing seventh seeds Daryl Selby and Adrian Waller from England at 8.30pm local time on a back court.

Also playing in the men's round of 16 doubles will be Coll, in his third match of the day when he teams with Campbell Grayson to take on the Pakistan combination of Tayyab Aslam and Farhan Zaman at 7.40pm local time (9.40pm NZT) on court 4.

In the last match of the day Kiwis Amanda Landers-Murphy and Zac Millar were beaten by Indian eighth seeds Joshna Chinappa and Harinder Pal Sandhu in the round of 16 match 7-11, 11-10, 5-10 in 34 minutes. The Indians now faces King and Coll in the quarter-finals at 6.50pm (8.50pm NZT) on the show court.