Kiwis Prepare For More Matches In Doubles As Quarters Beckon 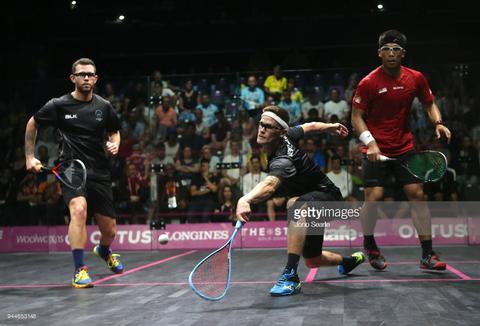 It took seven days of competition, but Auckland's Lance Beddoes, 25 who is competing in doubles only finally got on the court to play a match at the Gold Coast Commonwealth Games.

In his second Commonwealth Games Beddoes joined Evan Williams to play eighth seeds Nafiizwan Adnan and Ivan Yuen of Malaysia in their first men's doubles group match. Unfortunately the result didn't quite go their way in the hard-hitting contest which featured a number of questioned calls and a stroke penalty against on match ball as the Kiwis to lost the match 9-11 10-11 in 46 minutes.

However Beddoes and Williams are far from out of contention as they take on St Vincent and the Grenadines Omari Wilson and Othniel Bailey tomorrow (Thursday).

After their win against Australians Sarah Cardwell and Christine Nunn in the final group match top seeds and world champs Joelle King and Amanda Landers-Murphy have been confirmed in the women's doubles quarter-finals to be held on Friday. However as a result of their loss in early group play the top seeded Kiwis, are now pitted against the second seeded English pair of Jenny Duncalf and Alison Waters who they beat in the final to win the women's doubles world title in Manchester last year.

Meanwhile third seeds Paul Coll and Campbell Grayson won their men's doubles on a back court over the Malta pair of Daniel Zammit-Lewis and Bradley Hindle 11-4, 11-10 in 25 minutes for their second victory of the competition. They play a round of 16 match tomorrow.

In mixed competition top seeded Kiwis Coll and King easily accounted for a Malta pair, Hindle and Dianne Kellas 11-2 11-4 in 13 minutes in their pool match and could be on court twice as a combination Thursday as they play their round of 16 mixed match early in the day against the Barbados team of Meagan Best and Shawn Simpson with a likely quarter-final contest in the evening.

Fellow Kiwis Landers-Murphy and Zac Millar are also through to the last 16 and have drawn the Indian pair of Joshna Chinappa and Harinder Pal Sandhu.

Full Schedule for the morning below: