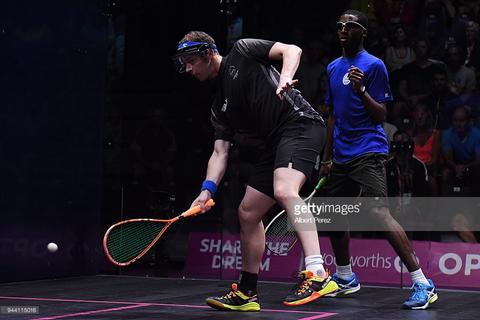 A good start to the second day of squash doubles and mixed at Oxenford Studio on the Gold Coast.

Top seeded Joelle King and Amanda Landers-Murphy beat the Australian pair of Sarah Cardwell and Christine Nunn 11-8 11-6 in 20 minutes, although there was a little bit of a let off in the first game.

The Kiwis were up 8-4, and let their opponents back into the match. However the victory after their loss the previous day puts them in line to progress to the next round, unless the Australian team beats tough Malaysian pair and then countbacks may need to be used.

"It was probably our worst performance (against the Malaysians)....but we get better each day. We were just flat yesterday. Hopefully we can move forward. It was a pretty positive start (today). We started to gel a lot better in this match," said singles gold medal winner Joelle King.

"It's a team effort. We wanted to prove we could play better. It was tough going back-to-back yesterday and having a loss in there as well. Now I have a bit of time to rest," said Rotorua's Amanda Landers-Murphy who played one doubles and two mixed the previous day.

Meanwhile men's third seeds Paul Coll and Campbell Grayson won their men's doubles on a back court over the Malta pair of Daniel Zammit-Lewis and Bradley Hindle 11-4, 11-10 in 25 minutes for their second victory of the competition.

In their second mixed contest of the competition top seeds Coll and King easily accounted for a Malta pair, Hindle and Dianne Kellas 11-2 11-4 in 13 minutes.

"I think we were pretty sharp today, we haven't had a chance to practice together here, but seemed to be okay," said King. "We were happy with the things we were working on. It's the Commonwealth Games we are taking things pretty seriously. We wanted to win. We know each other's game and we're just looking forward to tomorrow," said silver medallist, Coll after the match.

Later in the evening Lance Beddoes finally takes the court when he teams up with Evan Williams against the tough Malaysian pair of Nafiizwan Adnan and Ivan Yuen.