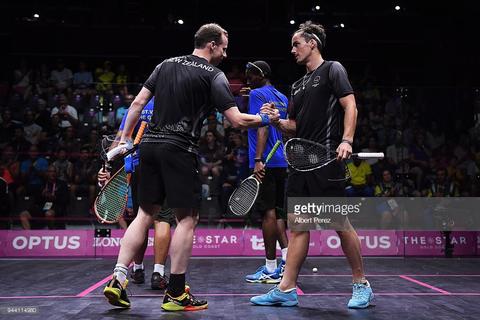 After the euphoria of singles gold and silver it was back down to earth for the New Zealand squash team as play re-started, this time with the men's and women's doubles and mixed.

King and Landers-Murphy, the double world champions and top seeds in the Gold Coast came up against a ninth seeded Malaysian pair of Rachel Arnold and Sivasangari Subramaniam who started the match quickly and held on in each game.

The match was over in quick fashion with doubles the best of three games and sudden death at 10-all, the Malaysians winning 11-10, 11-10 in 24 minutes.

It appeared at times that the transition from singles to doubles wasn't easy for King, however as the game progressed the Kiwi combo looked better and perhaps if the match had gone to a third they may have come through.

"It's quite a change from singles to doubles," said King "It's not over yet, we traditionally start slow as a pair but come back strong."

Landers-Murphy had only 10 minutes to rest before going on court for her second match of the day (she has a third later on) teaming with Zac Mllar in mixed pool play. However they found themselves against the experienced English pair of Jenny Duncalf and Adrian Waller.

Landers-Murphy had played a number of matches so far in the Games, but for Millar it was his first on court match. Initially the English roared ahead to win the first game 11-5, but the Kiwis fought back to win the next 11-10, however the final had the English gaining an early lead and managing to stay in front to win 11-5 in the third.

Landers-Murphy and Millar scored a win later in the day as the easily beat the Malta pairing of Colette Sultana & Daniel Zammit-Lewis 11-6 11-6 in their second group match.

"Doubles is so quick and exiting to watch. People should really get in to it. It's full on, no rest and so quick with it been best of three games only and sudden death points," said Millar who hails from the Kapiti Coast.

In further mixed play King and Paul Coll who are the current world champions and top seeds teamed up and wasted little time. In fact their group match took just 10 minutes as they destroyed the Papua New Guinea pairing of Lynette Vai and Madako Junior Suari 11-4 11-7.

In the final match of the day Coll and Campbell Grayson accounted for Jason Doyle and Jules Snagg from Saint Vincent and the Grenadines 11-4, 11-2 in 15 minutes.

Tomorrow King and Landers-Murphy play their vital women's doubles against the strong Australian pairing of Sarah Cardwell and Christine Nunn to open the day at 11am while on a different court, also at 11am local time Coll and Grayson play their second group match when they face a team from Malta.

Coll and King will play their second group mixed contest also against a Malta pair in the afternoon while Lance Beddoes finally gets to play a match when he takes the court in the evening on the show court with Evan Williams against the tough Malaysian pair of Nafiizwan Adnan and Ivan Yuen. 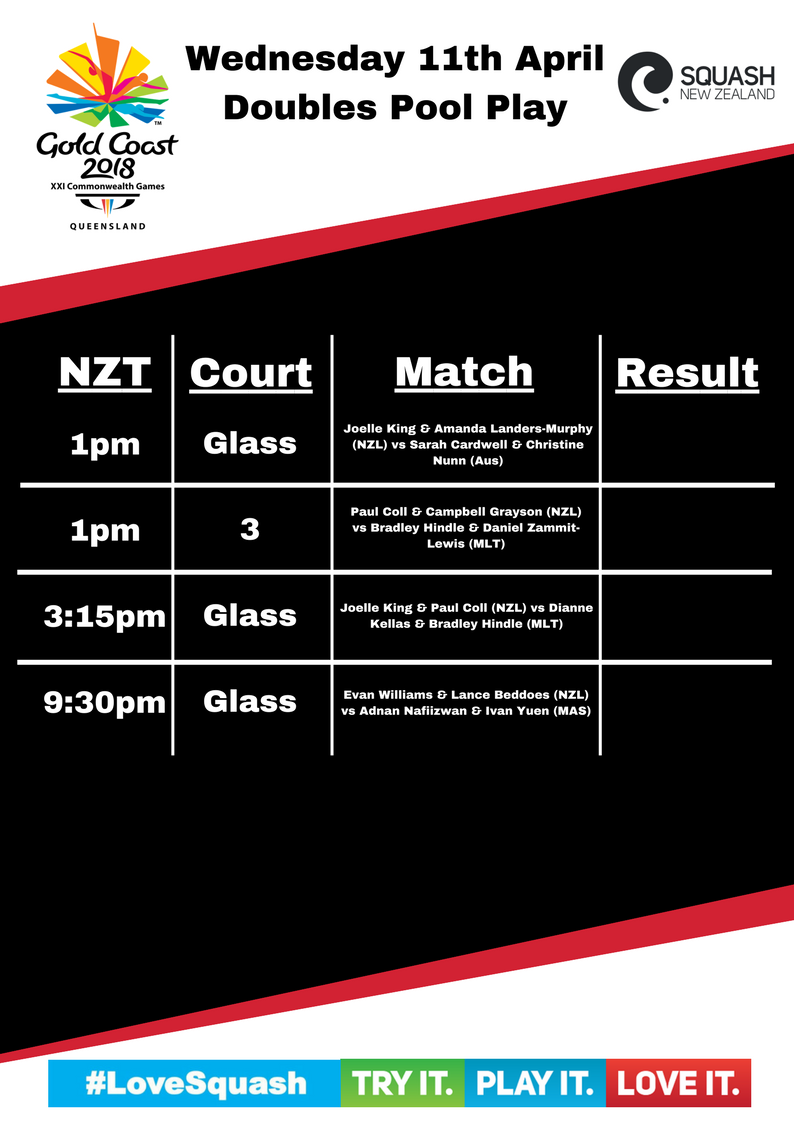