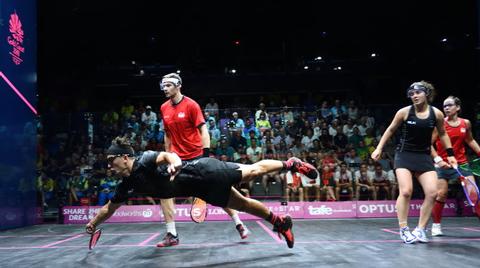 Less than 24 hours after the drama of the Singles medals finals day, Commonwealth Games Squash action switched to Doubles as players took to the wider courts in bids for glory in the Men's, Women's and Mixed events at Oxenford Studios in Gold Coast, Australia.

There was a significant Pool upset early in the day in the women's event when Rachel Arnold & Sivasangari Subramaniam, the ninth seeds from Malaysia, brushed aside top seeds Joelle King & Amanda Landers-Murphy, the reigning world champions from New Zealand.

The match took place some 16 hours after King celebrated becoming the first Kiwi to win a singles gold medal - after surviving a dramatic and energy-sapping 78-minute final.

But Arnold & Subramaniam clearly made no allowances for this, storming to a shock 11-10, 11-10 best-of-three victory (the standard doubles scoring) over the favourites.

"We were ready for a tough match," said 21-year-old Arnold, ranked 51 in the world. "We stuck to our plan and we played really well."

Rising Malaysian star Subramaniam, a 19-year-old Games debutante ranked 42 in the world, added: "We've played a lot of doubles in Malaysia - we did a lot of work to focus on doubles, so we were well-prepared.

"It was a really good start for us - especially as they are top seeds in the draw. I was really pleased with what I did in the singles - our confidence levels are getting higher. But we've got to keep going and win tomorrow."

King and Landers-Murphy need to win their remaining match to keep alive hopes of making the knockout stages.

King made up for her disappointing doubles start later in the day when she teamed up with men's singles final runner-up Paul Coll to beat Papua New Guinea pair Lynette Vai & Madako Junior Suari 11-4, 11-7 in the Mixed event.

"Just focussing on the men's doubles - the one event for us - is great," explained Palmer, a double Doubles gold medallist in the Glasgow Games in 2014 and the player with the most Games medals of all-time - eight in five appearances since 1998. "Having the extra courts to practise on has been the first time ever, at any Games, so I think that will definitely help us later in the tournament when the matches get harder.

"We've played a couple of world championships, we partner up well - I'm on the backhand and Zac's on the forehand so I think we mix up pretty well, between his attack and my experience."

On celebrating his sixth appearance in the Games in 20 years, the 41-year-old from New South Wales said: "It's a funny feeling, but I still get nervous. It's fun, I still like to compete - and especially here in Australia. We don't get to play many times in front of our Aussie crowd - it's motivational watching people like Pilley play, with a huge crowd behind him - and hopefully it'll happen for us this week in the doubles. We're a little under the radar I think, which is good, but on the day we're still capable of doing well."

What is the motivation to keep coming back? "I'm coaching a lot now, but I miss that competitive side - I don't get to play too many events for myself any more - and also the fact that it's here on the Gold Coast in Australia. I remember how great it was playing in Melbourne. Level-wise I'm still OK to play, body is still pretty good. I'm still looking for another challenge and I'd love to get another medal with Zac.

"I'm not here to make the numbers up - I'm here because I still think we can do very well."

After resting during the singles, England's Jenny Duncalf & Adrian Waller both made their first Gold Coast appearances by beating New Zealanders Amanda Landers-Murphy & Zac Millar 11-5, 10-11, 11-5 - recovering from the loss of the second game after being ahead by taking the decider.

"Doubles always is fast and furious - it's definitely more frantic than singles and you can't afford to fall back on your feet at any time in the entire match," said Duncalf, a former world No.2 making her fourth appearance in the Games. "We were pleased to come back in the third strong.

"It's my fourth Games - but I'm still young at heart and on occasions like this and tournaments like the Commonwealth Games, I still get so excited - just watching, it's brilliant, but we've been chomping at the bit to get on court."

Waller added: "We seem to have been waiting a week or ten days - so it's great to get out there. There's nothing that beats being on court.

"We have managed to practise every day. We settled really well there (in the match) and are happy to move on to tomorrow. We've played bits and pieces over the summer - but this is the first time we've played competitively."

"They definitely played a lot better than we expected," admitted Chinappa later. "We were 10-7 up so we obviously had no business losing that first game - but they had a few good shots and few winners.

"But we regrouped and decided enough is enough and wanted to finish it off as quickly as possible - and I think the scoreline shows that!"

When asked what it was like to return as the defending champions, Pallikal explained: "We're usually used to defending titles every year, but this is a four-year gap and a lot has changed over the last four years - the competition's higher than what it was four years' back.

"We can't take anything lightly so we're just excited to be here. Yes, we do want to defend our gold but I think the main thing for both of us is to enjoy the whole process of trying to win the whole event.

"When we got back home last time, there was a lot of spotlight on us, a lot of attention - which was great. We were just excited about it, not just personally but for squash in general.

"I guess for us to have won that gold told people that we were as good as any other athletes in the country and we can win a gold at the highest standard. It was huge for us - even today people call us the Commonwealth gold medallists so hopefully we can go back home next week with another gold so that people can call us double gold medallists!"

"I've obviously come off a heavy few days and Declan's fresh," said Willstrop. "I'm now very keen to make sure I'm ready to play as well as I can - I've got to recover well and forget about yesterday.

"Having won yesterday, you're on a high - it's a lovely feeling. There's the physical aspect you need to get round - but there's no lack of motivation. I'm really up for this. We've worked so hard together. I feel it's quite comfortable to put an end to the matter of yesterday - this is a new thing now."

James, making his first appearance in the Games, added: "I was bringing in some fresh legs - I've been here for ten days now, training, preparing and seeing the boys battling in the singles so I've got the bit between my teeth now. If I can add a bit of freshness and sharpness to Jimbo's momentum then I'm hoping that will make for a potent combination."

Aussie doubles hope are being led by top men's seeds Ryan Cuskelly & Cameron Pilley, the reigning world champions. Pilley came away with gold both in 2010 and 2014 - in the former a mixed gold with Kasey Brown and in Glasgow the men's gold with David Palmer.

He and Cuskelly - who appears back to full strength after being forced to withdraw from the singles event with a leg injury - began their 2018 campaign in impressive style beating Fiji pair Sailesh Pala & Romit Parshottam 11-3, 11-0.

Aussie compatriots Rachael Grinham & Donna Urquhart were two of several players who played three matches on day one. Together the duo won two women's doubles clashes - the final one of which saw the fourth seeds resist a spirited attack from Samantha Cornett & Nikki Todd, the fifth seeds from Canada, to win 5-11, 11-9, 11-4.