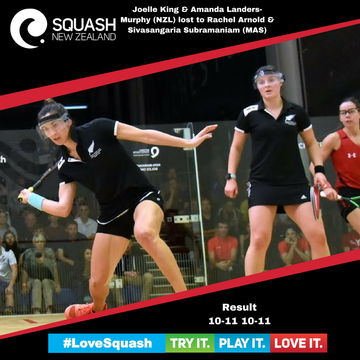 Back down to earth for women's singles gold medal winner, Joelle King.

Less than 24 hours after winning New Zealand's first singles gold medal in squash at the Commonwealth Games, King and Amanda Landers-Murphy have lost their first pool match in women's doubles in straight games.

King and Landers-Murphy are the double world champions and top seeds in the Gold Coast but came up against a ninth seeded Malaysian pair of Rachel Arnold and Sivasangari Subramaniam who started the match quickly and held on in each game.

The match was over in quick fashion with doubles the best of three games and sudden death at 10-all, the Malaysians winning 11-10, 11-10 in 24 minutes.

It appeared at times that the transition from singles to doubles wasn't easy for King, however as the game went on the Kiwi combo looked better and perhaps if the match had gone to a third they may have come through.

"It's quite a change from singles to doubles," said King "It's not over yet, we traditionally start slow as a pair but come back strong."

Landers-Murphy had only 10 minutes to rest before going on court for her second match of the day (she has a third later on) teaming with Zac Mllar in mixed pool play.