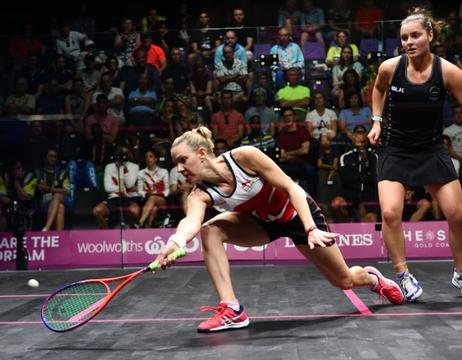 England celebrated 100% success in today's third round of the Squash singles events at the 2018 Commonwealth Games in Gold Coast, Australia, where the nation will have interest in three of the four quarter-finals in both the men's and women's events - for the fifth time since 2002.

The day began with a blow for the hosts when it was announced that No.6 seed Ryan Cuskelly, the world No.15 from New South Wales, had withdrawn following a leg injury sustained during his second round match - putting Malaysia's 12th seed Nafiizwan Adnan through to the quarter-finals.

Defending gold medallist Nick Matthew led the way for England in the men's event with an 11-6, 8-11, 11-6, 11-6 win in 43 minutes on the all-glass showcourt at Oxenford Studios over Vikram Malhotra, the 16th seed from India.

Unbeaten in the event since 2006, the gold medallist in 2010 in Delhi and 2014 in Glasgow will celebrate his 38th birthday in July - by which date he will have retired from the professional squash circuit after a glittering career which includes the world number one ranking and three world championship titles.

"I enjoyed being on there with these dangerous players," said the top-seeded Yorkshireman after claiming his place in the last eight. "People are going to raise their game 10 or 15 per cent in this environment - and I need to raise mine by 10 or 15 percent as well. But I didn't today - I probably played at my normal level. He put on a really good show today and I was probably a little lucky to come away relatively unscathed at the end.

"I came in probably expecting to play Ryan in front of the Aussie crowd - but I'll have to fully reassess that. I've played Wan before - he is a dangerous player. He used to be based in Manchester and I trained with him a few times. He's a little bit more of a known quantity compared to today as I'd never played Vikram before."

On competing in the Commonwealth Games, Matthew added: "We had that massive moment at the Opening Ceremony and everyone is buzzing in the village. Team England are such a close team. I just love things like this, rubbing shoulders with the other big names in the England team. It shows in the respect each of has for each other's sports.

"Squash may not be an Olympic sport but, if it was based on the respect the other athletes have for our sport, we'd be in there tomorrow! You can sense that among the guys and I just want to make them proud.

"Australia's a great sporting country and we've been given an unbelievable welcome."

When asked how easy it is to motivate himself for a fourth Games, Willstrop replied: "It's a more relaxed motivation now maybe - it's not life and death like it is when you're younger.

"It's probably likely to be my last one," added the 34-year-old. "So I'll try and give everything I can and I hope it works.

"A multisport event like this is totally different to what we're used to - it's like a super-charged squash event. I usually walk off after an event, but here the world's press line up to talk to me!"

Willstrop will face career-long rival Cameron Pilley for a place in the semi-finals after the seventh-seeded Aussie ended Jamaican Lewis Walters' historic run 11-3, 11-4, 11-8

Selby's opponent will be Kiwi Paul Coll, the No.2 seed and the event's highest-ranked player who defeated unseeded Malaysian Ivan Yuen 11-5, 11-6, 11-4.

The other quarter-final will be an all-British affair in which Scot Alan Clyne and Welshman Joel Makin will both be making their quarter final debuts.

Top women's seed Laura Massaro needed to call upon all her experience to overcome Kiwi Amanda Landers-Murphy 11-8, 13-11, 11-8. The former world number one from England, now ranked seven in the world, is bidding to go one better than the silver medal she won four years ago.

"It was always going to be tough because I've never played Amanda before," said Massaro after the match. "I knew she was a leftie but we tend to play in different tournaments. I thought she played really well.

"Yesterday was tough because you're playing a complete unknown, someone from a country you've never been to - so that was tough - and today Amanda had quite a lot of support in the crowd. But obviously I've got quite a lot of experience behind me now and know how to fight my way through.

"The Commonwealth Games is massive - it's brilliant to be part of a multi-sport games and be in the village. It's something really special, being able to follow other sports and their results.

"There's not many tournaments that I haven't got my name on. There's a few that I'd still like to try and win before my career is over - and this is one of them.

"But I don't want to put too much pressure on myself because I play my best squash when I just believe in myself and sometimes when I'm not expecting myself to win. I'm the No.1 seed for this tournament but on my recent form I really feel like I probably should be four or maybe five - so I'm taking a bit of pressure off myself even though I've put a lot of work in the last few weeks.

"But everybody's been playing so well - I think people would look at the draw and say that there's probably five of us in with the chance of a gold medal. I certainly think I'm one of them and I've just got to get my best level out."

Waters progresses to face Malaysian star Nicol David, the third seed who battled for 50 minutes to get the better of Canadian Samantha Cornett 20-18, 8-11, 11-7, 11-3. David, making her sixth successive Games appearance after making her debut in 1998, is bidding to win a third successive gold medal.

"All credit to Christine - she didn't let me play my game," said Urquhart after earning her first quarter-final berth in the Games. "We're team-mates but I don't think we've ever played in a tournament. I know she's in really good form at the moment. I went into this expecting a tough battle on my hands. It's really great to see her playing so well.

"It was really important today to get all those nerves out - I feel I've played myself into the tournament now.

"I'm going to be the one going out there tomorrow with nothing to lose - and going for it. Hopefully I can play a little more freely.

"Being in my first quarter-final is huge. I'm stoked!"

After a series of injury woes, Urquhart is just three places short of her career-high ranking of 13. Is she back to her best?

"I think I'm playing better than I ever was before. It's just that the standard of squash is even higher. So every time I've been out injured I've not only had to get back to where I was, but catch up with where everybody else is too. I think I've got a lot more experience and play a better game mentally."

After reaching the last eight for the first time following her 11-6, 11-8, 11-4 win over Australian Tamika Saxby, Chinappa said: "It's nice to be able to justify your seeding but you obviously want to take it further - and I'm looking forward to trying to do that."

The 31-year-old from Chennai was a surprise gold medallist in the 2014 Women's Doubles, with Dipika Pallikal Karthik.

"It was great to win the gold last time - and to be honest, when it happened, it never really sunk in for me. But we soon realised how much value the gold actually has meant and what it did for Indian squash - and that's what we're trying to do with our game, trying to promote it, trying to make it a big sport in our country so that people can take it up. I am very privileged to have had that opportunity."

Second seed King, now the highest-ranked woman in the draw, was taken to four games by Games debutante Sivasangari Subramaniam, a 19-year-old from Malaysia, before winning 11-3, 9-11, 11-7, 11-3.

"I've never played her before but I know she's a very dangerous player - if she has any opportunity to go short and take the ball, she will," explained King afterwards. "In the third, it took me a while to get in front of her - she dominated me on the T, but once I went back to basics and found the corners I gained control. She's definitely one to watch and gave me a run for my money.

"I came here wanting to do well and know I've got to do everything I can to do well."