Landers-Murphy Beaten By Top Seed In Last 16 Of Squash 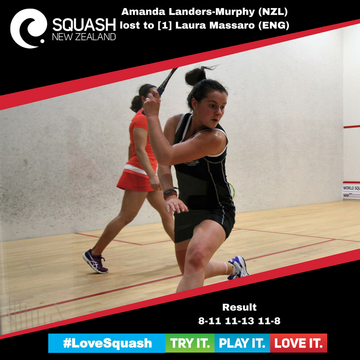 The New Zealander had her opportunities, particularly in the second game where she had a four point lead, but the experience of the 34-year-old Massaro showed through as she controlled a couple of vital points on the show court.

"I got a few points up, but just tensed up a bit. I didn't get a lot of time to practice on the glass court, but Laura played well in the match," said Landers-Murphy who has a current PSA ranking of 41 in the world.

There are three more Kiwis in action this evening in last 16 men's and women's matches. Men's 10th seed Campbell Grayson plays 5th seed James Willstrop (England) at 8.45 NZT, with second seed Joelle King in the women's singles against a Malaysia opponent at 9.30pm NZT and Paul Coll set for his match against Malaysian Ivan Yuen at 10.15 NZT.