Two Out Of Two For Kiwis At Squash 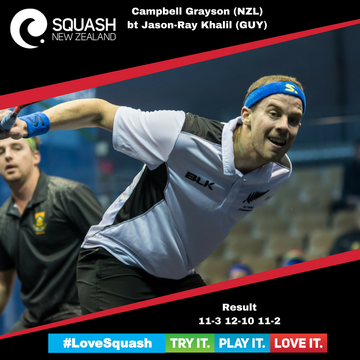 Two out of two for New Zealand squash players so far at the Gold Coast Commonwealth Games.

Tenth seed Campbell Grayson joined Evan Williams in winning his first round match, both players finishing off their opponents in straight games.

"I just switched off a bit in the second game. I had had quite a big lead initially. I hadn't played him before so I didn't know what to expect. In some ways it's good to have a bit of a challenge," said Grayson who is at his fourth Commonwealth Games. "It's good to get a match under the belt. I would rate it a six or seven. It's just good to play after all of the build-up."

Earlier Williams in his first Commonwealth Games won his first round match over Cayman Island's player Jacob Kelly 11-9, 11-5, 13-11 and will play 12th seed Nafiizwan Adnan of Malaysia this evening at 8pm local time.

At 7.20pm local time (9.20pm NZT) second seeds Joelle King and Paul Coll plus 11th seed Amanda Landers-Murphy will take the court for their first matches of the competition.