Early Success In Initial Round At Commonwealth Games Squash 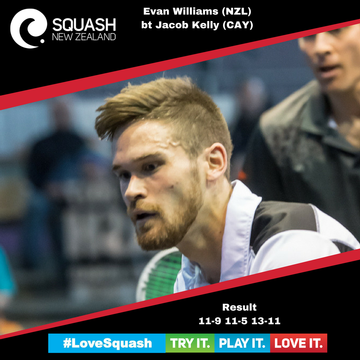 Early success for New Zealand in the first round of squash men’s singles at the Oxenford Studios venue with Wellington’s Evan Williams scoring a straight game victory in his opening match.

Williams, 28 in his first Commonwealth Games defeated Cayman Island’s player Jacob Kelly 11-9 11-5 13-11 to progress to the second round where he will take on 12th seed Nafiizwan Adnan of Malaysia this evening at 8pm local time.

Williams had to battle in first game after dropping a few quick points, but it was in the third set where he had a game point against him but still managed to take control when required to win the match

“It wasn’t pretty and I never found my target, but it’s good to get through. There were perhaps a few nerves initially, but it’s another game tonight, this time on the glass court. He’s (Adnan) is playing well and it will be another five levels up, but we’ve played before and it was close. We’ll see what happens,” said Williams.

Next on court for the Kiwis is 10th seed Campbell Grayson against Jason-Ray Khalil from Guyana.

Later in the evening Joelle King, Amanda Landers-Murphy and Paul Coll all play their opening matches in the second round.