Kiwis On Court On Day One Of GC Commonwealth Games

It's a full day of play for the New Zealand squash team at the Gold Coast Commonwealth Games as action gets underway tomorrow (Thursday 5 April) at Oxenford Studios which is commonly known as Movieworld.

Evan Williams (Wellington) will be the first Kiwi in singles when he takes the court against Jacob Kelly from the Cayman Islands in the round of 64 at 1.10pm local time (3.10pm NZT). The 28-year-old is in his first Commonwealth Games and if he wins against Kelly will find himself playing at 8pm the same day against 12th seed Nafiizwan Adnan of Malaysia.

In-form Campbell Grayson who is at his fourth Commonwealth Games is the tournament 10th seed and faces Jason-Ray Khalil from Guyana in the first round at 3.10pm local time (5.10pm NZT). The Aucklander has recently defeated a top-10 ranked opponent as well as reached the finals of a couple of PSA events. If Grayson wins his first round he'll be on court again at 8pm local time.

There are three matches featuring Kiwi players at 7.20pm (9.20pm NZT) as Paul Coll, Joelle King and Amanda Landers-Murphy take to the court in the second round after initial round byes. Seeded second Coll and King were ranked 11 and 7, respectively in the world when the draw was done, however both have risen in the latest rankings to No.4 and 9.

Coll, 25, made his debut in the 2014 Games, while 29-year-old King won a silver in mixed doubles in Dehli 2010 and gold in women's doubles with Jackie Hawkes at the same Games. She achieved singles bronze in the Glasgow Games. King will play either Welsh woman Deon Saffery or Pakistan's, Madina Zafar in her second round match.

Coll will take on either Christian Navas (Gibralter) or Kelvin Ndhlovu (Zambia) in his first match of the tournament, which will be in the second round.

Rotorua's Amanda Landers-Murphy who is the 11th seed will play Sri Lanka's Mihiliya Methsarani in her 7.20pm match.

The singles final and medal playoffs are scheduled for Monday 9 April with tickets for the semis and finals of both singles and doubles competitions later in the tournament close to selling out. Squash is played on all 11 days of the Gold Coast Commonwealth Games. 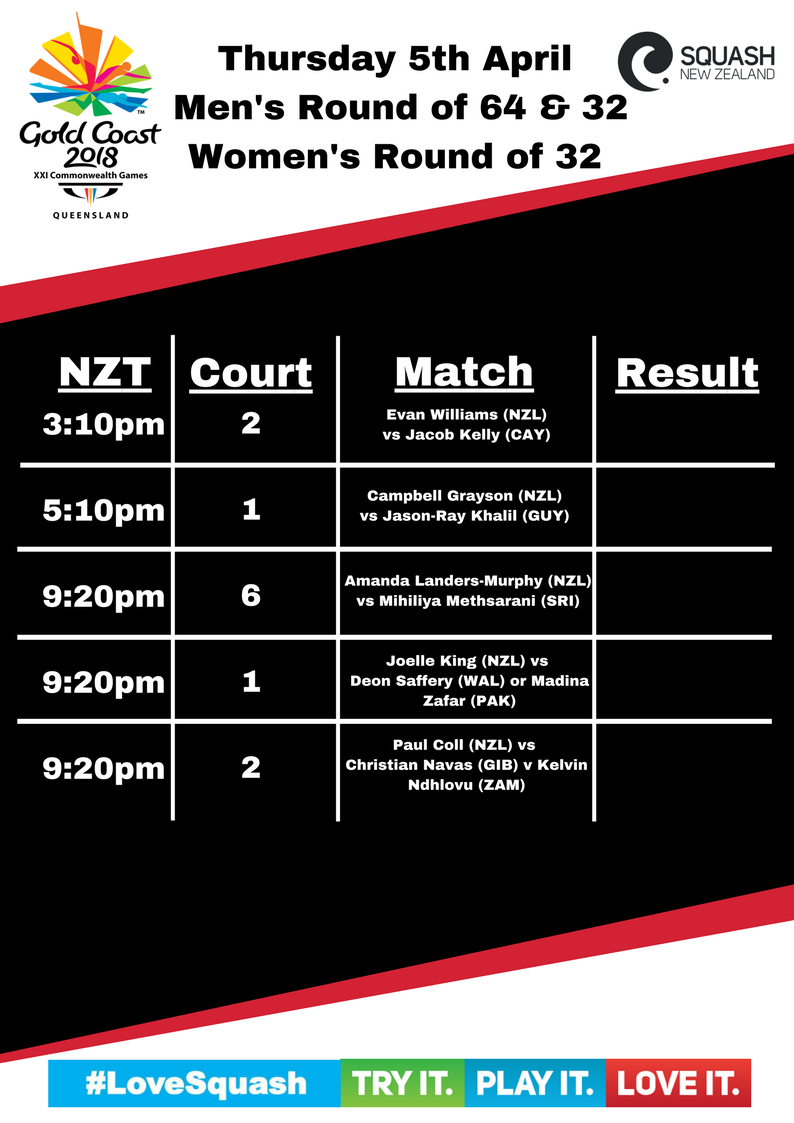