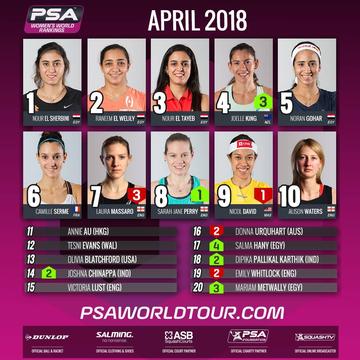 New Zealand’s Joelle King has returned to the world squash top five rankings for the first time since October 2014, rising three places to sit at No.4 after the PSA Women’s World Rankings for April were released today

This means she will be the highest ranked player taking place at the Commonwealth Games on the Gold Coast starting this week.

King spent 10 uninterrupted months inside the world’s top five in 2014 but slipped down the rankings after rupturing her achilles in the final of the New Zealand Nationals in August of the same year, eventually falling as low as world No.57 12 months later.

However, the 29-year-old Kiwi - who is seeded second in the Commonwealth Games singles event and first in both the women's and mixed doubles events - has displayed some of her best ever squash this season, reaching finals at the Macau Open, U.S. Open and Windy City Open, the latter of which saw her appear in a World Series final for the first time in her career, while she lifted the Cleveland Classic title in February.

King is the only non-Egyptian inside the top five, with Nour El Sherbini heading up the rankings ahead of world champion Raneem El Welily and Windy City Open winner Nour El Tayeb, while Nouran Gohar stays at No.5.

Camille Serme sits at No.6 ahead of England’s Laura Massaro, who falls three spots to No.7, which is her lowest ranking since July 2011.

Massaro’s compatriot Sarah-Jane Perry moves up a place to No.8, while Malaysia’s eight-time world champion Nicol David drops to No.9, her lowest ranking since January 2004. England’s Alison Waters completes the top 10.

Additionally New Zealand’s top ranked male, Paul Coll has risen up the April men’s world rankings two places to No.9 in the world.

By improving his ranking Coll, 25 from Greymouth also becomes the top ranked player from the Commonwealth as England’s Nick Matthew, a multi gold medallist at Commonwealth Games level has fallen in rankings from No.8 to 12. However as a result of the singles draw being put together prior to the latest rankings Matthew will remain top seed and Coll second seed.

There are seven Egyptians in the current men’s top 10 rankings.