Through Harbour Sport, KiwiSport funding has had a significant impact in increasing the number of new juniors squash players throughout the North Harbour region.

There has been considerable increases in squash club membership by junior squash players all over the region with Browns Bay Racquet Club seeing particularly strong growth. In term one of this year their junior membership grew by 53 players after a Harbour Sport KiwiSport funded session was delivered at the local school where all were encouraged to visit the club.

Many North Harbour squash clubs have benefited by offering juniors a chance to play squash for free at Junior Club nights. Another opportunity is a six week, $40 after school programme for individual North Harbour schools to send their students. Northcross Intermediate had 22 participants in an afterschool program and five junior players joined the club. The North Shore Squash club has also seen an increase in junior memberships by offering all of the previously mentioned and adding a special price for junior members of only $70 per annum. If a student needs further incentive, Squash Auckland is offering a free Head racquet for any junior joining any Auckland squash club for 12 months or more. 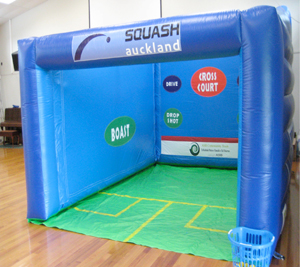 The school and club link has been the most important as Squash Auckland has utilised club coaches for school coaching. The squash coaches are able to develop a relationship with the students giving them the ability to up sell the squash club facilities and programmes both verbally and via flyer distribution. Since being funded by KiwiSport, Squash Auckland's delivery of coaching programmes has vastly improved. They have not only received funding from North Harbour's KiwiSport but have also received support from them in the form of critiquing and video analysis in conjunction with the Greater Auckland Coaching Unit, which has improved coaching quality.

Squash New Zealand's coaching framework has had a positive effect on the coaches as the modules within the framework are targeted by AGE. This has coaches thinking about player centred coaching instead of technique focused on information and resources.

The need for junior squash players was brought to light at the Browns Bay Racquet Club when they noticed that membership was not regenerating with new, young players. As the juniors moved up to the men's and women's leagues, they were not being replaced at the junior level. Now the club feels that they have a stronger base for the future of squash and the future of their club.