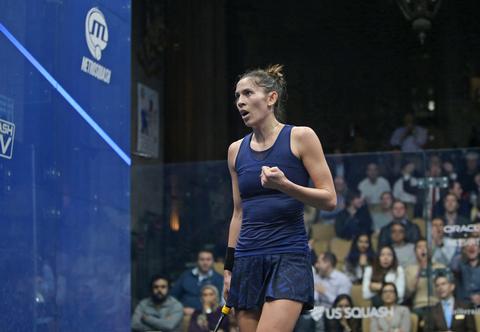 The 29-year-old from Cambridge is up to a world ranking of seven and is preparing well for the Gold Coast Commonwealth Games in two weeks’ time where she will be the second seed in the women’s singles. However she’s not getting ahead of herself and expecting a medal as a result of her seeding.

“I think it’s nice to see a reflection of a good season so far, my ranking is up to No.7 and it’s just nice to have that number and seeding next to your name. It doesn’t guarantee you anything as the strength of the draw is probably one of the most even I’ve seen…every match is going to be tough,” said King.

The top seed is world No.4 Laura Massaro from England, but two other top 10 players are hard on the heels of the Kiwi second seed.

“SJ (Sarah-Jane Perry from England)and Nicol (Nicol David from Malaysia)will be three and four seeds and the five to eight brackets have some tough players too. Also in the nine to 16 there are some wildcards who could cause upsets. You have to be on your game and have to think about each game as it comes.”

It will be the third Commonwealth Games for King who won a bronze in singles in Glasgow in 2014 as well as a silver in mixed and a gold in women’s doubles in Dehli in 2010. The Gold Coast will be another chance for King to get into a team environment, something she loves.

“I’m looking forward to getting in the team environment. We’ve got such a cool great group of players. Amanda (Landers-Murphy) and I are the only two girls with all the boys. We all lift each other. Glen (Wilson) and Wayne (Werder) are great coach and managers. We’re all pretty excited to head into camp and then to the Gold Coast.”

“It’s been a good year for me so far, but everyone only remembers the last game you played. The excitement is starting to build now. I had four tournaments in a row, then a couple of days off but now with the training I’m getting back into the swing of things. It’s getting pretty real,”

Fellow Kiwi Paul Coll is the men’s singles second seed as well. It is expected that King and Coll will be in the top couple of seedings for the mixed doubles and King with Rotorua’s Landers-Murphy will also be highly seeded in the women’s doubles competition.