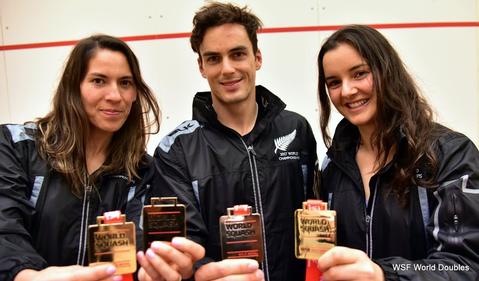 The draw was completed officially on Monday night and both Coll and King won't have things all their own way if they are to take away gold medals.

English players are the favourites with current No.8, Nick Matthew and world No.4 Laura Massaro the top seeds in their singles draws based on the March PSA rankings.

The Men's and Women's Singles Championships will take place at Oxenford Studios in Gold Coast, Queensland, from 5-9 April, followed by the Men's, Women's and Mixed Doubles events from 10-15 April.

Matthew is bidding for a third successive gold in his final season as a professional. The 37-year-old former world No.1 from Sheffield, a three-time World Champion, reached the semi-finals in his first appearance in the Games in 2006 in Melbourne before striking gold in 2010 and 2014 in Delhi and Glasgow, respectively.

Massaro, also a former world No.1 and World Champion, is marking her third appearance in the Games. The 34-year-old from Preston reached the quarter-finals in 2010 and celebrated Silver in 2014 - on both occasions losing out to Malaysia's formidable Nicol David.

David, from Penang, is the only player celebrating a sixth Singles appearance in the Games after making her debut on home soil in 1998 as a 15-year-old! Now 34 and seeded three in Gold Coast, David is also targeting a record third successive gold medal.

Coll and King are, ranked 11 and 7, respectively, in the world, both the second seeds. Coll, 25, made his debut in the 2014 Games, while 29-year-old King was a double Doubles medalist in 2010 and achieved singles bronze in the Glasgow Games. Both have byes in their first rounds. King will play either Welsh woman Deon Saffery or Pakistan's, Madina Zafar in her second round match.

Coll will take on either Christian Navas (Gibralter) or Kelvin Ndhlovu (Zambia) in his first match of the tournament, which will be in the second round.

"I'm really excited about this year's Commonwealth Games being so close to home," said Coll. "I have a lot of family and friends coming to support me!

"Obviously it's a very important event for me - I always loving playing in black. I decided not to play any tournaments in PSA over the last five weeks before the Games to train and come in fresh!!

"I can't wait to be back in the New Zealand team environment - we always have a hell of a time."

Other Kiwis in the singles draws include, in form Campbell Grayson from Auckland who is the tournament 10th seed and faces Jason-Ray Khalil from Guyana in the first round. Evan Williams (Wellington) is the third Kiwi male in singles and plays Jacob Kelly (Cayman Islands) in his first round encounter.

Joining King in the women's singles draw is Rotorua's Amanda Landers-Murphy who is the 11th seed and also has a bye in her first round.

Players from 28 nations will be competing in the two singles competitions: