Millar Looking to Make his Mark at 2018 Commonwealth Games 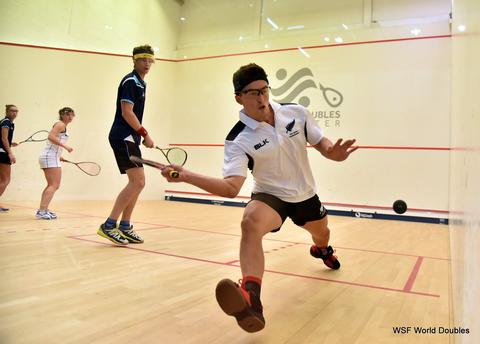 In 2012 Zac was selected for the World Junior Men’s Championship team to compete in Doha, Qatar. Millar has since been studying at the University of Waikato under the Sir Edmund Hillary Scholarship programme working towards a Bachelor of Management Studies. In 2017 though Zac was called up again to represent New Zealand in the World Doubles Championships in Manchester, England where he was paired with Amanda Landers-Murphy.

Whilst Millar is yet to claim a PSA World Tour Title to his name he will be sure to be progressing in the right direction in the lead up to the 2018 Commonwealth Games. Gold Coast 2018 will be Zac’s first Commonwealth Games and he will compete in the Mixed Doubles (with Amanda Landers-Murphy). Zac was born in the Kapiti where he completed his schooling before he moved to Hamilton to study at the University of Waikato. Zac is currently coached by Nick Mita, he is 23 yrs and is of NZ European ethnicity.

We look forward to seeing Zac compete in his first Commonwealth Games and seeing what he can manage to pull out of the bag!