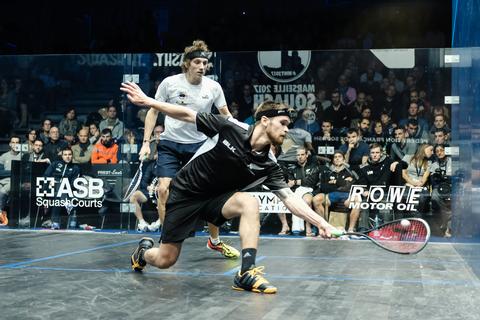 As we continue to profile our players in the leadup to the Gold Coast 2018 and in our #LoveSquash campaign we take a look at Evan Williams and the trials he has faced throughout his career to get him to this stage!

In 2014 Williams experienced an injury to his wrist whilst competing in Australia and on his maiden PSA World Tour Title win in 2015 at the Waikato Open Williams reflected on that moment “This is my first PSA title out of 8 finals and it means a lot to me. I was injured last year and missed out on a lot. I didn't know if I was ever going to play again. So, to come back from injury and be able to win is very pleasing. It's great to play a tournament at home in NZ. Thank you to Squash Waikato and Hamilton Squash Club for giving us this opportunity. They've done a great job.". Williams would go on to claim the South Australian Open later that year and in 2016 he would go back to back in claiming the Devoy Squash and Fitness PSA Open and defend his Waikato Open title. Williams last PSA World Tour Title came in 2016 at the Bendigo Open where this bought his total title haul to 5.

Williams will be proud of what he has achieved and fought back from to get to this stage of his career. With Williams holding a current WR of 90 he will be sure to use this as a springboard for the Gold Coast.

Gold Coast 2018 will be Evan’s first Commonwealth Games where he will compete in the Men’s Singles and Men’s Doubles (with Lance Beddoes). Evan was born in Rotorua and currently splits his year between Wellington and the United Kingdom. Evan is currently coached by Nick Mita, he is 28 yrs old (DOB – 20th September 1989) and is NZ Maori of Ngati Porou descent.

We look forward to following Evan and his achievements at the 2018 Commonwealth Games.