Amanda Landers-Murphy and the rise to a Double Gold Medalist 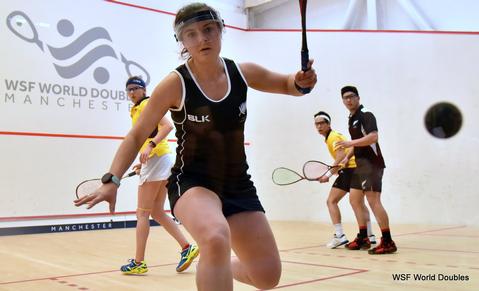 Next on our #LoveSquash profiling of our Commonwealth Games Players we look at Amanda Landers-Murphy and where she has come from to now being a Double Gold Medalist in the Women’s Doubles event.

Amanda is another top athlete who has a very light Junior Trophy cabinet, Amanda has a single Junior Age Group Title to her name and this is the 2008 South Island Junior Age Group Title for the Under 19 Age Groups. This however hasn’t stopped her from pursuing a professional career! Amanda has 2 Senior Titles to her naming having claimed the 2009 and 2014 South Island Senior Championships titles.

It was in 2009 that Amanda made her first appearance for New Zealand competing in the 2009 World Junior Championships hosted in Chennai, India where she competed alongside Lana Harrison, Emma Millar and Megan Craig. Amanda made it through to the top 32 before being knocked out by an Egyptian player Kanzy Emad El-Defrawy. The team placed 8th in the event this year after some hard fought matches and stellar performances. It was in 2012 that Amanda made her first appearance for New Zealand in the Senior Women’s team competing in Nimes, France. In 2014 Amanda would put the fern on twice competing in her first Commonwealth Games in Glasgow and then later that year at Niagra on the Falls in Canada in the Women’s Senior Team Championships. In 2016 Amanda would compete in the Senior Women’s Team Championships in Paris, France but her real shine would come at the 2016 World Doubles Championships where her and Joelle King would claim Gold in the Women’s Doubles event! In 2017 in Manchester, England the pairing would repeat their feat again and become double Women’s World Doubles Champions, try saying that fast three times! Landers-Murphy’s left hand combination and exceptional shot playing makes her one of the best Female Doubles Players in the World, and alongside Joelle King this pairing has been a formidable duo.

It was in 2013 that Landers-Murphy reached a career high of WR#35 however she now maintains a WR#39.

Gold Coast 2018 will be Amanda’s second Commonwealth where she will compete in the Women’s Singles, Women’s Doubles (with Joelle King) and Mixed Doubles (with Zac Millar). Amanda was born and raised in Rotorua and this is where she currently resides. Amanda is currently coached by Danny McQueen, she is 26 yrs old (DOB – 7th June 1991) and is NZ Maori of Taranaki and Te Ati Awa descent.