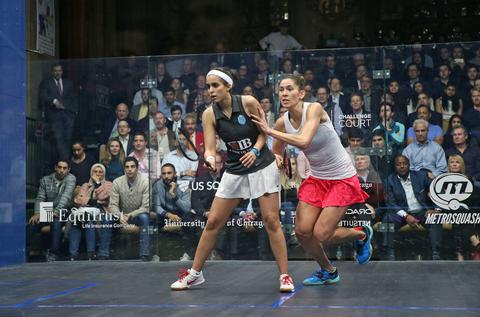 Joelle King has fallen at the final hurdle of the prestigious Windy City Open squash tournament in Chicago, losing a gruelling final in five games to Egyptian world No.3 Nour El Tayeb.

Having tweaked her ankle in the third game, King appeared on the ropes, but somehow managed to secure the game 13-11 and take the match into a decider.

It was her first ever World Series final.

The 29-year-old Waikato native made an off-colour start, going down 11-8 in the first game after a late El Tayeb surge of point-scoring. But she duly rallied with an encouraging second game, going in front early and riding out the result, and won the third despite her ankle troubles.

Holding a 5-0 advantage in the fourth game, King's win appeared certain. But the feisty El Tayeb gradually fought back and, capitalising on a tiring King's unforced errors, won point after point to take out the fourth. In the decider, the Egyptian once again overcame a deficit to take the match.

The ninth-ranked King can still expect a rankings boost and a healthy payday from her performance at the $US250,000 ($343,000) World Series tournament, which followed her win at the Cleveland Classic earlier this month.