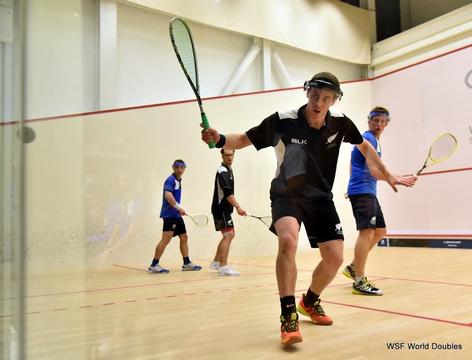 Campbell Grayson has one of the most extensive histories of our 2018 Commonwealth Games team having been on the International circuit for over 10 years and having competed at numerous levels and claiming a plethora of titles to his name, but where did it all start? We take a look back as part of our #LoveSquash campaign.

Grayson had been competing on the PSA World Tour Circuit for 5 years before he clinched his first title win in 2008 at the North Island Championships. Grayson’s next win would come a year later in 2009 at the NZ Classic where he would take out a long time rival Martin Knight to get his second PSA World Tour Title. 2011 saw Grayson claim the Goiania Powerade Open, whilst in 2012 Grayson claimed the Victorian Open and Prairie AutoHaus Saskatoon Boast. In 2013 Grayson took the Houston Open and the Victoria Open Titles bringing his PSA World Tour Title wins to 7. In 2014 Grayson made it 8 PSA World Tour Titles taking out the Las Vegas Open, he then repeated the feat in 2015 to bring his Tour Titles to 9. 2016 saw Grayson add 2 more titles to his mantelpiece taking the Manitoba Open and the Lifetime Chicago Open titles. Grayson claimed his last Tour Title in 2017 at home in Auckland at the Squash XL Open bringing his tour wins to date to 12.

Needless to say the achievements and history of Campbell Grayson are impressive with over 461 PSA World Tour matches to his names, Grayson reached his career high in October 2017 where he reached #34 in the world.

Gold Coast 2018 will be Campbell’s fourth Commonwealth Games where he will compete in the Men’s Singles and Men’s Doubles (with Paul Coll). Campbell currently bases himself in New York where he lives full time with his fiancé and is currently coached by Rodney Eyles.

The experience Campbell brings to this team will no doubt be of great use and we look forward to seeing what he can do at these games!