King Makes Quarters Whilst Coll Out in Round 1 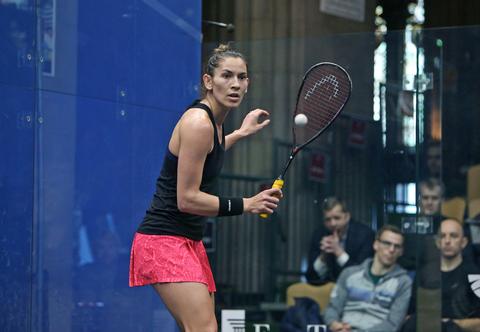 Joelle King was untroubled in winning her first round match at the Windy City Open in Chicago, beating an English qualifier inside half an hour.

Kiwi No.1 and tournament ninth seed King beat veteran former world No.2 Jenny Duncalf 11-4 11-8 11-4 to advance to the second round.

In Round 2 Joelle King scored a hard-fought victory over world No.4 Laura Massaro from England to reach the quarter-finals of the US$250,000 Windy City Open in Chicago.

The 6-11, 11-9, 11-6, 8-11, 11-6 victory in 70 minutes will give ninth-ranked King great confidence for the Gold Coast Commonwealth Games in April. Massaro is the top-ranked player from a Commonwealth nation while King is fourth-ranked.

Massaro started the brighter of the two players and was clinical with her shots to punish King, who had a high error count in the first game.

The second game started in a similar fashion as 34-year-old Massaro continued to look the stronger of the two, racing into a 5-1 lead before a big rally saw King get her confidence back as she made it 5-3.

From then on it was all about King with the World No.9 beginning to stretch across the middle and take on the volley drops to take a 6-5 lead for the first time in the match, before taking the second, 11-9.

The Kiwi then doubled her advantage in the third as she cut her error count right down to punish Massaro as she showcased her athleticism to full effect.

However, in true Massaro style, the Englishwoman refused to be beaten and showed her resilient prowess that she has become known for on the PSA World Tour to take the fourth, before King was able to close out an impressive turnaround to win.

“On the head-to-head I’ve only beaten her once and that was last year. So, it’s always a tough mental battle.

“In the first I was getting completely outplayed and I had to dig deep to come back so I’m really proud of that win.

“Physicality is probably where my strength is, I’m not the most talented squash player I sometimes rely on my physicality to get me out of trouble and once I got more comfortable on the court I felt it

really come together and so I’m really pleased to come back from being down.”

The 29-year-old from Waikato now faces American Amanda Sobhy in the quarter-finals.

The men's and women's tournaments both offer a prize pool of $US250,000 ($NZ343,000). King and Coll are building towards the Commonwealth Games on the Gold Coast in April, where they will spearhead New Zealand's promising shot at singles and doubles medals.

Two other Games-bound Kiwis - Campbell Grayson and Amanda Landers-Murphy - were beaten in the final round of qualifying in Chicago.