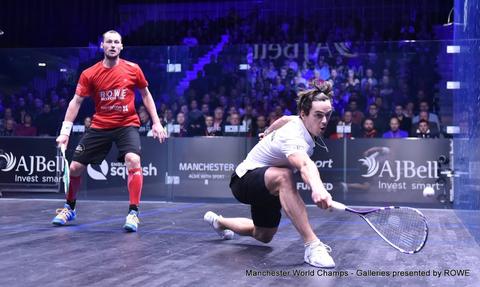 As we continue to look at Paul Coll this week in our #LoveSquash Campaign we need to go back to the beginning to see where it all started for Paul.

Paul hails originally from the West Coast of New Zealand, specifically Greymouth, however he now bases himself in The Hague in The Netherlands. This is where his squash playing career started after his Mum and Dad introduced him to squash at a young age. Unlike players before him who own a trophy cabinet of Age Group titles Coll didn’t claim his first Age Group title until 2010 when he won the North Island Age Group Championships Under 19 title. 2010 was an exceptional year for Coll claiming 3 major Junior titles including the New Zealand Junior Open, North Island Age Groups Title and the New Zealand Junior Age Groups title, he then proceeded to protect his title at the 2011 New Zealand Junior Age Groups.

Prior to claiming these titles Coll had moved from Greymouth to Christchurch for schooling where he studied at Christchurch Boys High School. This gave him more access to regular training and higher competition. Coll had been driving over from Greymouth to Christchurch for regular coaching before his move. Glen Wilson and Robbie Wyatt will recall a decision where they considered leaving Coll out of the National Junior Development Squads, however his commitment that he was showing in driving these lengths on a weekly basis were justification to keep him in, we are pretty sure they don’t regret keeping him in now!

Coll also spent some time in Auckland after finishing schooling and in 2010 he made his first appearance for New Zealand when he made the World Junior Men’s Championships team to compete in Quito, Ecuador. Looking back now Coll might say he was disappointed with his result losing out in Round 2 of the event, however this was the same event Ali Farag finished Runner Up in! The team of Paul Coll, Lance Beddoes, Bryce Redman and Michael Sunderland however performed well finishing 6th in the event achieving a result as good as the 1992 team.

Coll then proceeded to play PSA World Tour events in New Zealand and Australia and in 2013 his first tour title came at the Australia Day Challenge. Coll then claimed the Doubledot Media Christchurch Boys’ High School Open 2013 title and defended his Australia Day Challenge title in 2014 and again in 2015. Coll’s next big win came at the IG Markets Open de Paris 2015, and this was his first $15K title. Coll also claimed the NT Open title which was his first $25K event win and this broke him into the top 50 in the world. Coll won the Australian Open title alongside Joelle King. Coll also became the New Zealand Senior Nationals Champion for the first time in 2015 winning the title in his home district of Canterbury. Coll claimed one more title in 2015 the London Open 2015. In 2016 after a series of stunning dives against former World No.1 James Willstrop during March’s Canary Wharf Classic he earned the nickname ‘Superman’. Coll then took three titles on the bounce in the New Zealand June Series.

Coll’s breakthrough moment came in December’s Channel VAS Championship in Weybridge, where he battled through from qualification to lift his first PSA M100 title - upsetting established top 20 players such as Max Lee, Miguel Angel Rodriguez, Daryl Selby and, finally, Tarek Momen to claim his place among them in the January rankings. Whilst Coll hasn’t claimed a title since then he became the first New Zealander since Ross Norman in 1995 to claim a place in the World’s top 20 and broke into the Top 10 in September 2017.

Gold Coast 2018 will be Paul's second Commonwealth Games having previously competed in Glasgow in 2014. However Coll has represented New Zealand at the 2016 and 2017 World Doubles Championships as well as the 2011, 2013 and 2017 World Men’s Team Championships.

At the 2014 Commonwealth Games Paul reached the final 32 in the Men's Singles. Paul was paired with Lance Beddoes in the Men's Doubles where they were knocked out in the Quarter-Finals by England after they had previously taken out fellow Kiwis Campbell Grayson and Martin Knight in the top 16. In the Mixed Doubles Paul was paired with Amanda Landers-Murphy where they reached the quarter-finals before being knocked out by Australia.

Paul is currently coached by Tommy Berden, and is of NZ European ethnicity.

We look forward to following Paul at the 2018 Commonwealth Games and seeing what he can achieve!