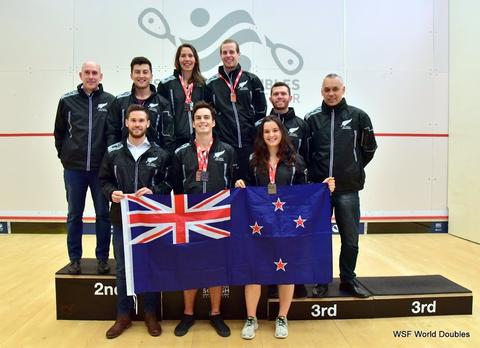 The female contingent of the team is made up of three-time Commonwealth Games medal winner and women’s world No.9 Joelle King from Cambridge, and Rotorua’s Amanda Landers-Murphy, ranked 38th in the world.

The team has a wealth of experience to call on, and as well will form combinations which have proven successful in at recent Squash World Doubles Championships.

NZOC CEO Kereyn Smith extended her congratulations to those selected.

“This is a fantastic group of athletes and I believe they will perform well individually as well as in their doubles pairings,” she said.

“There are strong medal prospects within this team and I look forward to watching these athletes represent New Zealand with pride and honour on the Gold Coast.”

Gold Coast 2018 will be Joelle King’s third Commonwealth Games and the 29 year old will go in as the fourth ranked woman at the Games.

King has a superb record at Commonwealth Games, claiming a singles bronze medal at Glasgow 2014, a silver in the mixed with Martin Knight in Dehli 2010, and gold in women’s doubles in Dehli with Jaclyn Hawkes.

“It’s great to be named in the team for the Commonwealth Games, I love playing for my country,” said King.

“It’s definitely going to be a tough battle for who will take out a medal. It’s going to be exciting squash and hopefully it’ll make for a great competition.”

King has returned to top form after an injury break in 2014 and yesterday won her latest tournament on the PSA tour, defeating current world champion and world No.2 Raneem El Welily (Egypt) in the Cleveland Classic.

King will compete in women’s singles, women’s doubles (with Amanda Landers-Murphy) and mixed doubles (with Paul Coll). King and Landers-Murphy will be an exciting prospect in the women’s doubles, having won gold medals at the last two World Doubles Championships. King and Coll will also be a combination to watch in the mixed doubles, having won the World Doubles title in 2016 and 2017.

For Landers-Murphy Gold Coast 2018 will be her second Commonwealth Games having previously competed in Glasgow 2014. She will play in the women’s singles, women’s doubles (with King) and mixed doubles (with Millar).

In the men’s team Paul Coll is currently the second ranked player from the Commonwealth behind England’s Nick Matthew at No.8.

Coll has been displaying good form, making the final of the Motor City Open in Detroit on Monday (Feb 5th). Gold Coast will be Coll’s second Commonwealth Games, having previously competed at Glasgow 2014. He will compete in the men’s singles, men’s doubles (with Grayson) and mixed doubles (with King). Coll and Grayson combined for a World Doubles Championships bronze medal in 2017.

For Evan Williams Gold Coast 2018 will be his first Commonwealth Games. He will contest the men’s singles and doubles (with Beddoes).

23 year old Millar will also be making his Commonwealth Games debut as he competes in the mixed doubles (with Landers-Murphy). At the 2017 World Doubles Championships Millar and Landers-Murphy finished ninth.

Meanwhile Lance Beddoes returns for his second Commonwealth Games, having previously competed at Glasgow 2014. He will compete in the men’s doubles (with Williams).

New Zealand has won nine medals at Commonwealth Games since the sport was first included in 1998 at Kuala Lumpur, Malaysia.

The naming takes the total number of selected athletes to 99.