King Makes It a Set at the 2014 Glasgow Games 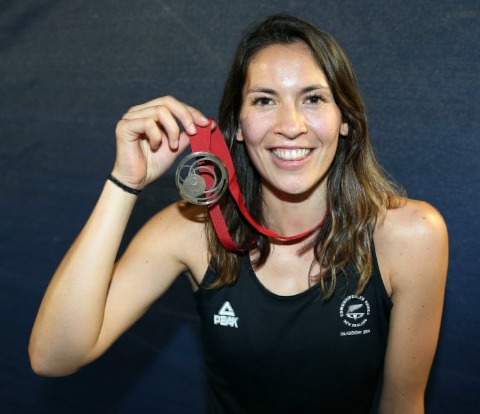 As we look towards the past for the last time in our #LoveSquash review of the Commonwealth Games, 2014 saw a squash team of fresh faces and experienced heads attend, but the Games saw only a single medal come home for squash.

It was the largest multi-sport event ever held in Scotland with around 4,950 athletes from 71 different nations and territories competing in 18 different sports, outranking the 1970 and 1986 Commonwealth Games in Edinburgh. Over the last 10 years, however, Glasgow and Scotland had staged World, Commonwealth, European, or British events in all sports proposed for the 2014 Commonwealth Games, including the World Badminton Championships in 1997.

The Games received acclaim for their organisation, attendance, and the public enthusiasm of the people of Scotland, with CGF chief executive Mike Hooper hailing them as "the standout games in the history of the movement". Held in Scotland for the third time, the Games were notable for the successes of the Home Nations of the United Kingdom, with England, Wales and hosts Scotland achieving their largest ever gold medal hauls and overall medal hauls at a Commonwealth Games. England finished top of the medal table for the first time since the 1986 Commonwealth Games, also held in Scotland. Kiribati also won its first ever medal at a Commonwealth Games, a gold in the 105 kg men's weightlifting competition.

Squash sent one of it’s largest teams to the Games with Campbell Grayson, Martin Knight, Paul Coll, Lance Beddoes, Joelle King, Megan Craig, Amanda Landers-Murphy and Kylie Lindsay competing whilst it was Paul Hornsby and Dave Clarke who took on the roles of coach and manager.

The Kiwis had put in considerable Doubles training in the leadup to the Games with competitions against Malaysia and India, New Zealand proving they would be a force to be reckoned with. King was on track to have an outstanding performance as she reached a career-high ranking of 4 in April prior to the Games. King worked extremely well up to the Games and had strong performances during the Women’s singles event. King came up against World number 1 Nicol David in the Semi-Finals and unfortunately, David was too strong as she continued her dominance of World Squash at this time. King then took on Alison Waters in the Bronze medal match and showed how badly she wanted the medal having a strong 3-0 performance. The match didn’t come without its moments with King serving down and short in the third game, a feat the commentators said they hadn’t seen from a professional player before.

After the successes of the singles event and an expectation for some strong doubles performances, the team took to the courts. The competition proved to be tough for the players and when it came to the round of 16 in the Men’s doubles the Kiwis came face to face with Campbell Grayson and Martin Knight taking on Paul Coll and Lance Beddoes. Coll and Beddoes proved to come through on the day before taking on the English duo of Darryl Selby and James Wilstrop where they went down in an enthralling match many Kiwis will still remember to this day. It was a similar fate for many of the other teams, they performed well throughout the events but it was not meant to be as all the teams were knocked out in the Quarter Finals or earlier. The only duo to make it to the semi-finals was the Mixed pairing of Joelle King and Martin Knight but they went down in their bronze medal match to the Autralians.

It's been a great ride for squash over the past 5 Commonwealth Games, now the focus for squash is the 2018 games on the Gold Coast and the announcement of our team tomorrow morning at 7:30am!