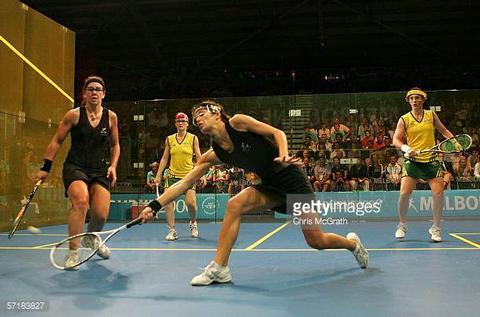 8 years on since squash featured for the first time in the Commonwealth Games the rules changed on the competitors. Previously the Bronze medal matches had not been played, as in similar format to all other World Squash Federation events, but 2006 saw all events playing off to claim the Bronze medal. The Commonwealth Games remains to this day the only event where the 3/4 playoff matches are played.

For the first time in the history of the Commonwealth Games, the Queen's Baton visited every single Commonwealth nation and territory taking part in the Games, a journey of 180,000 km (112,500 miles). The relay ended when the Governor of Victoria, and former Commonwealth Games medalist, John Landy delivering the baton to Her Majesty the Queen at the Melbourne Cricket Ground during the opening ceremony.

The games proved to be one for the Australians with Natalie Grinham claiming Gold in 3 events (Singles, Mixed Doubles and Women’s Doubles) and numerous other medals along the way. The Kiwis though proved their worth in the games and this Games it was Shelley Kitchen who proved to be New Zealand’s shining light.

Shelley first started hitting a Squash ball around the Kaitaia Squash Courts in 1984 as a five-year-old whilst accompanying her squash playing mother and sister to the club.

Shelley's potential was evident from an early age. She developed to become a true ambassador for New Zealand Squash and in particular for Women's Squash, where she carried on the fine tradition of both Dame Susan Devoy and Leilani Joyce.

She went on to compete both in New Zealand and on the World International circuit for nearly two decades and during that period Shelley became a role model for New Zealand as she travelled from country to country competing at the highest level. Shelley has used her profile to inspire and provide direction for younger generations of athletes, particularly within Far North Communities. It was this dedication and commitment that was instrumental in her being recognised as the New Zealand Maori Female Athlete of the Year in 2005.

Shelley was to become one of the hardest hitting female squash players in the world and one who continually outplayed her opposition by releasing her cracking forehand and backhand drives. 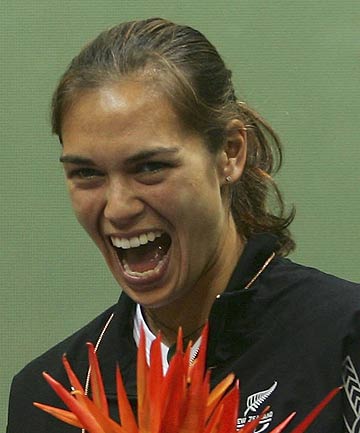 Kitchen started off her 2006 Commonwealth Games Campaign in the Women’s Singles where the 9th seeded player managed to take upsets along the way to make the semi-finals, unfortunately, she couldn’t take out Rachel Grinham which saw her head to the Bronze medal match. What was also unexpected was Nicol David the top seed was taken out by Natalie Grinham to send her to the Bronze medal match. It seemed to be an unlikely task for Kitchen and having complained about having to play that day (quote from NZ Herald "I was complaining about having to play today, thinking 'last time we didn't have a playoff'," Kitchen said in reference to the two bronzes awarded in Manchester four years ago.) the win proved to be one which made her feel like she had won gold. Kitchen claiming her biggest win on the tour to date by taking out David. Kitchen still recalls to this day how after winning her bronze medal match she turned around and see her father running down the stands through the security to embrace his daughter in this historic win.

It was straight back into it for Kitchen as she proceeded to pair up with Tamsyn Leevey and the 2006 World Doubles Champions were up to defend their title, however it was not meant to be as the Grinham sisters (Natalie and Rachel) took them out in the final.

Shelley was named in the 2010 New Years Honours receiving the New Zealand Order of Merit (MNZM) for services to sport.

The 2006 Games were one Kiwis will remember fondly setting expectations high for years to come. It also saw Martin Knight and Campbell Grayson take to the court for what would be a regular appearance for the players in the fern.