King, the world No.12 from Cambridge, lost the first game but fought back strongly to win the next two. Grinham, a four-time champion, rallied to take the fourth before a phenomenal battle ensued in the fifth.

A delighted King savoured the occasion after an important career milestone at the iconic O2 Arena in London. She said: "I was very nervous to start with on such a great stage as this. Rachael is a tough competitor and we are good friends off court.

"At the times when Rachael was on top I kept reminding myself that this is a great opportunity to reach the quarter-finals of the most famous tournament in squash. I was thinking "they will have to carry me  out of this place". I was ready to give everything."

King struggled to get used to the glass court set up in the London Piazza at an amazing events venue that staged a Barry Manilow concert on Tuesday night, Premier League darts tonight, and is gearing up to host Jay-Z and Kanye West for the next three nights.  She added: "I made a lot of mistakes and was not getting the feel of the ball at times. I guess I was a bit rushed, but she is a good player and on a glass court like this she is very dangerous. 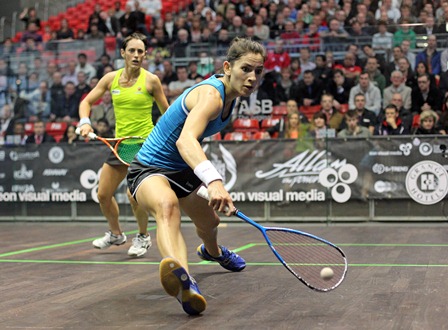 "I am pleased I held it together so well at the end."

King is settled back in New Zealand after three years of touring and is now working with new national coach Paul Hornsby.

David said: "Joelle played really well to beat Rachael so I will have to make sure I play well."

Meanwhile, New Zealand's Jaclyn Hawkes has bowed out of the tournament, beaten in straight games by French 10th seed Camille Serme.  The unseeded Kiwi could not repeat the first round heroics that saw her beat 8th seeded Australian Kasey Brown, going down 11-2, 11-9, 11-5.