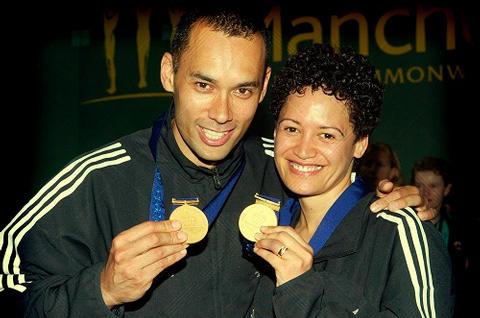 As we continue our #LoveSquash campaign we look back at the 2002 Commonwealth Games held in Manchester which is likely to be classed as one of New Zealand’s most successful Commonwealth Games for squash to date, with 2 Gold medals and a silver medal coming back from the other side of the world.

The 2002 Games were to be hosted in the United Kingdom to coincide with the Golden Jubilee of Elizabeth II, head of the Commonwealth, and Manchester was selected for the 2002 Games ahead of London. The XVII Commonwealth Games was, prior to the 2012 Summer Olympics, the largest multi-sport event ever to be held in the UK, eclipsing the London 1948 Summer Olympics in numbers of teams and athletes participating. In terms of sports and events, the 2002 Games were the largest Commonwealth Games in history featuring 281 events across 17 sports.

Now, remember that young women who competed in the 1998 Commonwealth Games for Australia, this time she put on the Silver Fern and represented New Zealand. She has been referred to by Joseph Romanos - author of Long or Short? The Story of New Zealand Squash - as 'Australia's Gift'. A talented junior growing up in Melbourne, Australia, New Zealand's first introduction to this player was the 1989 World Junior Championship at Hamilton, where she finished third.

It wasn’t easy going through the senior ranks for this player as it was initially difficult and paved with obstacles. Not only Susan Devoy, but also two brilliant Australian players in Michelle Martin and Sarah Fitz-Gerald, provided stiff competition among the top echelons of the world rankings. However, determination and perseverance paid off for this player, who eventually climbed her way towards the top. 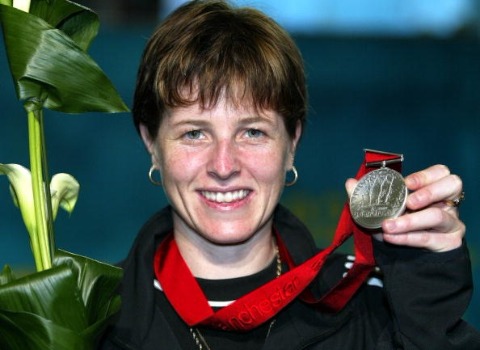 However she was faced with the possibility of premature retirement due to a heart condition, but a successful surgery enabled her to return to the circuit. This player was spending increasing amounts of time in Auckland, where she enjoyed working with coach Paul Wright and was a proud member of the Eden Epsom club. She underlined her return to international squash with a world title in 2000, beating Leilani Joyce in the final after being down 2-0 and 7-0 in the third set.

After representing Australia for the last time at the Kuala Lumpur Commonwealth Games (where she won a bronze medal in the Women's Doubles with Fitz-Gerald), by 2001 she was eligible to represent New Zealand. After winning back to back national titles, she represented New Zealand with distinction at the 2002 Commonwealth Games. If you haven’t worked out who this player is yet it is Carol Owens. The 2002 Games proved to be a successful event for Owens as she bought a silver medal home in the Women's singles after losing out to Australian Sarah Fitz-Gerald in the final

The 2002 games, however, saw a Golden Girl arise in the form of Leilani Joyce. Joyce was brought up in a sports-loving family of six in Hamilton, the second-youngest of four girls who ran, and played rugby, tennis and basketball. It was not until the age of ten that Leilani was introduced to squash, at the local YMCA by her rugby-playing father. Her father (who was new to squash himself) coached Leilani from an instructive manual published by the famous coach Dardir El Bakary. This worked so well that within a few years, once Leilani had started playing tournaments, she won every national age-group title available to her. 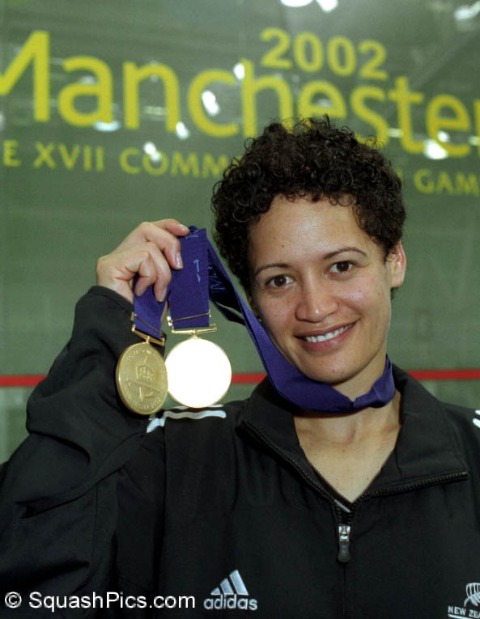 In 1993, at the age of 19, Leilani entered the international circuit, ending the year with a world ranking of 27 and a New Zealand ranking of 2. Her progress through the world rankings was steady. By 1997 Leilani Joyce (as she was now known) had risen to number 12 in the world, before climbing to 6 in 1998. 1999 was a breakthrough year for Leilani, when she won the British Open, was runner-up at the World Open, and rose to 3 in the world rankings. The following year, after 17 years of careful planning and hard work, she reached her ultimate goal: the world number one position. She held her number one ranking for ten months, which included a successful defence of her British Open title, but was unable to add the World Open title to her resume - losing consecutive finals in 2000 and 2001.

Shortly after the 2001 World Open final, Joyce ruptured her Achilles. The long enforced break all but ended her career - although she did find time to come back for a swansong at the 2002 Commonwealth Games in Manchester. Joyce was paired with Owens in the Women’s Doubles where the pair was too strong for their opponents claiming the gold medal. It was, however, the Mixed doubles where her and partner Glen Wilson did not drop a set the entire games. Joyce becoming a double gold medalist!

With what many Kiwis would class as one of our best performances at the Commonwealth Games the question will be whether 2018 can see a performance as good as this!