The national junior selectors have named the four-strong team to contest the 18th World Junior Men's Championships in Qatar in July.

The line-up was finalised after the Waikato Junior Age Group Championships at the weekend, the last of three selection tournaments along with the New Zealand Junior Open and the Wellington Junior Open last month.

Jonny Barnett has dominated the selection events, taking out both the New Zealand Junior Open and Wellington Junior Open titles.  However, he suffered a surprise 3-2 defeat to Zac Millar in the final of the Waikato event in Cambridge on Sunday.  It was sweet revenge for Millar, who finished runner-up to Barnett at the New Zealand Open at Remuera.

Todd Redman also confirmed his spot in the team with a 3-1 win over Ben Grindrod in the playoff for third.

New Zealand High Performance coach Paul Hornsby says settling on the final four has been a difficult task.  He says a squad of eight players was shortlisted in December and all eight have pushed their claims to the very end.

"The selection decision that was made this weekend was far from straight forward with such strength in depth. This has been a continual 'great problem' to have, as each individual player has pushed themselves to their limit, and in doing so forcing everyone in the squad to do the same."

However, Hornsby says the four players selected have all proved themselves deserving of a place in the team.

"I believe we have a depth of ability including incredibly fit athletes and exceptional shot makers. Perhaps most importantly, these players have demonstrated the mental strengths required to compete at international level and to represent New Zealand with pride and distinction at the event, which will be the pinnacle of their junior squash careers."

New Zealand finished 6th at the World Junior Championships in Ecuador in 2010.  The country's best ever finish in the biennial junior men's event is third in 1980. 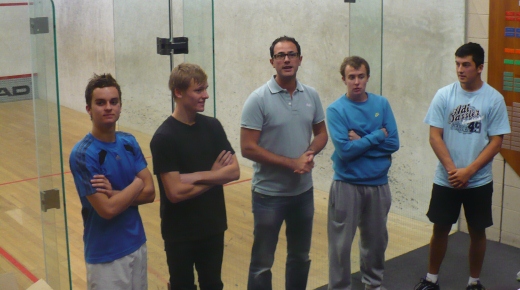