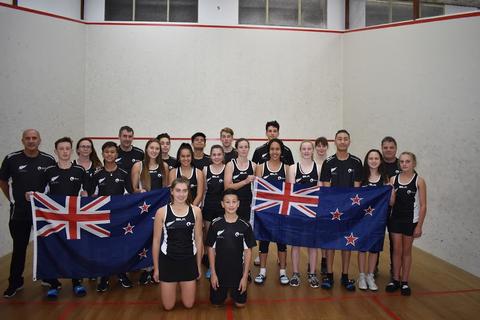 New Zealand has done a hat trick in this title and will be looking to make it four in a row after a strong performance at the Henderson Squash Club in 2017 which saw New Zealand claim the title 26-10.

The players named to compete in this team are as follow:

With 2 Junior Males and 2 Junior Females in the Under 13, Under 15 and Under 17 Age Groups and then 4 Under 19 Boys and 2 Under 19 Girls there are a number of close battles to be had with each player playing both the players in their relevant age group. The larger number of Under 19 Boys accounts for the World Junior Men’s Team Championships to be held in Chennai next year and gives our male players more exposure to international competition.

Shelley Kitchen High Performance Manager of Squash New Zealand says “On behalf of Squash NZ, I would like to wish the 2018 Executive Travel Trans-Tasman Test Series Team the best of luck against Australia. All the players have been working tremendously hard throughout the 2017 season and this is the first international event for the 2018 season for our emerging players. The Trans-Tasman test series event is a stepping stone to represent NZ at Junior and Senior World Championship events in the future”.

Leslie Ash of Executive Travel said “We are really excited to be a major sponsor of this team. As a provider of travel services to several national sporting organisations including Squash New Zealand we see the hard work and dedication that it takes to be at the top of your game and we wish all those competing every success.”

Robbie Wyatt and Nick Mita have been named as coaches of the team.

We wish the team well in their defense of the title.