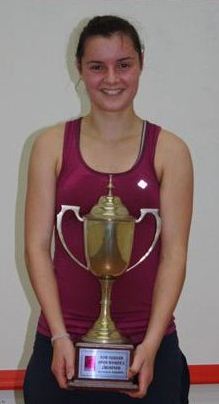 Amanda Landers-Murphy moves up one place to 51 on the WSA world squash rankings - a career high for the Ti Street squash player.

There was no change for New Zealand's Joelle King in the latest WSA (Women's Squash Association) world squash rankings. King remains at number 12 on the May list, despite racking up another victory over a top ten player last month.  King downed sixth ranked Annie Au from Hong Kong in the semifinals of the Texas Open, before being beaten by French world number 10 Camille Serme in the title decider.

It is the fourth month in a row King has been ranked 12th, two shy of her career high of 10 set in October last year.

Meanwhile, fellow Kiwi Jaclyn Hawkes has slipped two places to number 19 on this month's list.  Like King, Hawkes played just one event in April, going down 3-0 to Irish world number three Madeline Perry in the semifinals of the Irish Open.  It is Hawkes' lowest ranking since August 2008.

Four other New Zealand players are in the world's top 100, with Kylie Lindsay the next best at number 47, down one on last month.  Megan Craig climbs one spot to 86 and Larissa Stephenson is the big mover, up eight places to number 93.

Martin Knight remains the highest ranked New Zealander on the men's circuit, slipping one place to number 43 on this month's list.  Campbell Grayson also slips one to number 50 while Kashif Shuja is up three to 87.