The twins won both of the open titles on offer at the recently completed New Zealand Junior Open at Remuera Rackets Club.  It was the first time the feat has been achieved in the history of Squash New Zealand - and possibly the world over. 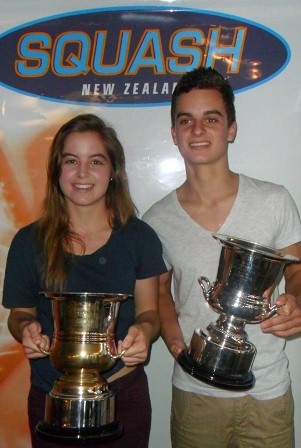 Their achievement has attracted plenty of interest from squash organisations and media around the world, and after hearing the news Campbell Live decided to feature the story.  The feature includes Jonny and Rebecca, their supportive parents Paul and Christine and their coach Neville 'Ted' Fyfe at the Mitchell Park Squash Club in Lower Hutt.  Rumour has it a mystery squash celebrity will also make an appearance in the piece!

The piece will be aired on Campbell Live sometime in the next fortnight.  As soon as we know the date we will let you all know via the medium of Facebook.  So if you're not already a fan of Squash New Zealand on facebook, drop what you're doing and 'like' us now - https://www.facebook.com/SquashNZ.