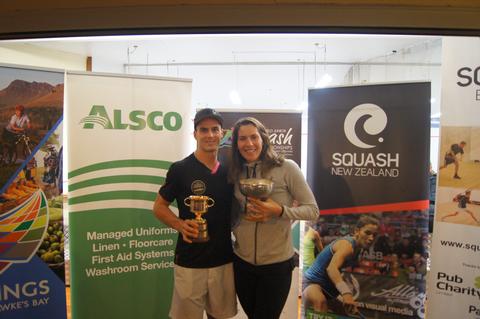 The Women’s final saw top seed Joelle King seeking to claim her sixth New Zealand Senior Nationals title whilst third seed Megan Craig was seeking her third title. Craig had upset the second seed Amanda Landers-Murphy the previous day in a hard fought four setter and was looking ready to bring her best against King. King used her dominance well and pushed Craig out of position playing some strong shots to claim the first game. It was a similar story in the second as King took a 2-0 lead. King looked set to claim the title at 10-7 before Craig fought back and levelled the score 10-10, but it was not enough with King claiming her sixth senior nationals title in 3-0.

The Men’s final saw top seed Paul Coll and second seed Campbell Grayson both seeking their third New Zealand Senior Nationals title. Grayson who is ranked 39 in the world took the match to Coll the defending champ and won the first game 11-8, in the second game Coll clawed his way back to win 11-7 and then gained the third 11-8 and the fourth 11-2 with the entire match taking 72 minutes in total.

A massive congratulations to the winners and a big thanks to Squash Eastern supported by Havelock North and Hasting Squash club for running the individuals event.

The quarter finals, semi finals and finals were livestreamed and can be found here or below in this article.