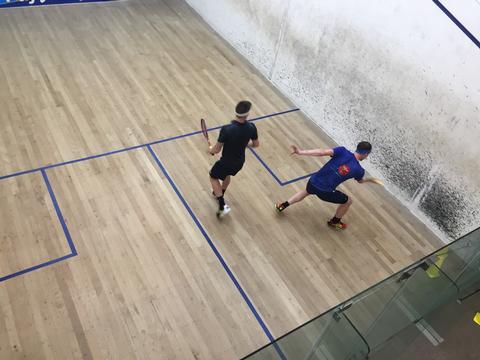 Top Seed Joelle King and third seed Megan Craig will do battle in the Women’s Open final whilst top seed Paul Coll and second seed Campbell Grayson will fight it out in the Men’s Open final.

Top seed Joelle King was too strong for her young opponent Kaitlyn Watts today as King stepped her play up working Watts around the court and putting her under pressure. Watts went down in 3 to King but Watts will take confidence having made her first Senior Nationals semi-final. In the other Women’s semi-final second seed Amanda Landers-Murphy and third seed Megan Craig did battle for fourth time in 6 weeks. Landers-Murphy was 3-0 against Craig but this time it was Craig who was looking for revenge. Craig was able to force the errors from Landers-Murphy and Landers-Murphy wasn’t able to take advantage of the leads with Craig sealing her place in the final with a win in 4. King will be looking for her sixth national title whilst Craig will be seeking her third. The final is on at 3:10pm on Sunday.

In the Men’s top seed Paul Coll was too strong and powerful against fourth seed Lance Beddoes, whilst Beddoes played some outrageous shots at points it was not meant to be with Coll claiming the match in 3. The second men’s semi-final saw second seed Campbell Grayson and third seed Evan Williams seeking their spot in the final. Grayson and Williams had some high intensity rallies with excellent placement of the ball around the court. Both players threw everything they could into the match and it looked set to go either players way but it was Grayson that claimed the win in 4. Coll and Grayson will both be seeking their third title with the final set for 3:50pm.

Livestreaming of the Finals begins at 3:10pm Sunday and the link can be found here or below in this article. All other Open games will be streamed from 9:50am on Sunday.