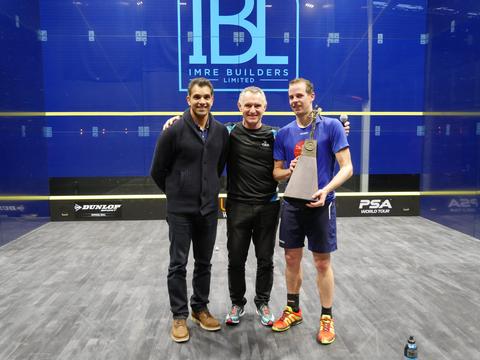 Campbell Grayson of New Zealand has taken out Greg Lobban of Scotland in the 2017 Squash XL PSA final on the all glass court in Auckland in a thrilling match of athleticism and shot play.

The first game saw some great power from both players and they moved each other round the court well. Grayson controlled the centre of the court well with Lobban having to cover more ground, despite this though Lobban was able to save 3 game balls to send the game long, but it was Grayson who took out the first game 12-10. The second game saw almost a repeat of the first with both players working hard and Grayson continuing to control the centre of the court. Lobban again saved game ball and had the opportunity to convert the game but it was not enough as Grayson took out a grueling 15-13 second game. The last game saw Grayson take good control and it was not enough for Lobban to come back as Grayson claimed the match in 3.

Congratulations to the Squash XL crew for their work and for hosting this event.

Livestreamed matches can be found here or below in this article.

Full details on the event, all previous matches and links to photo albums can be found here.