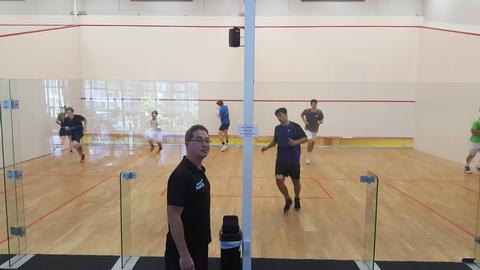 The 2017 World Junior Championship event promoters are organising a non-sanctioned Junior Men’s Teams Event in the second week of the Championships. It will add value to the countries travelling to New Zealand to compete in the world junior men’s individuals. New Zealand will participate in this event to add international exposure and competition for the New Zealand players on home soil on the 25th-29th July.

The six players in the New Zealand Junior Men's team are:

Manu is currently the high performance Auckland hub coach and is the lead coach for the Young Kiwi Squad. The Young Kiwi Squad consists of New Zealand's top juniors and transitional players moving from junior to senior ranks and meets every 6 weeks in Auckland. Manu is also the personal coach to two New Zealand top ranked juniors - Matthew Lucente and Gabe Yam. Manu's son Rafa has also been highly ranked in the New Zealand juniors for many years.

Manu and Glen will lead the New Zealand junior players throughout the championships and we wish them the best of luck in Tauranga in July.