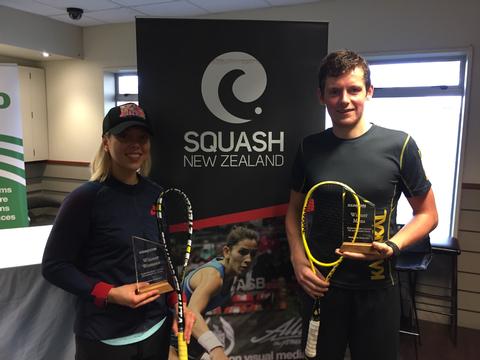 Lisa Aitken and Greg Lobban of Scotland have claimed the 2017 Fitzherbert Rowe Lawyers New Zealand International Classic PSA titles with their wins in the finals over Emma Millar of New Zealand and Mahesh Mangaonkar of India respectively.

The Women’s Final saw Aitken and Millar play a strong attacking game with both players looking for winning shots. Millar wasn’t able to settle in the first game with Aitken claiming the game 11-3. It seemed to be a turn of the tables in the second as Millar was able to find her winning shots and Aitken was pushed deep, Millar claiming the second game 11-4 and levelling the game score 1-1. The third game saw both players starting to build the rallies but it was Aitken that was able to clinch the third game 11-9. The last game saw Aitken dominate and Millar wasn’t able to find her rhythm with Aitken claiming the fourth 11-3 and her first PSA title.

The Men’s Final saw Lobban and Mangaonkar battle it out in a high intensity match with lots of dominance of the center of the court. Lobban dug deep and claimed the first game 11-8. The second game saw both players having long rallies and whilst Mangaonkar had opportunities to level the game score it was Lobban that retrieved well and put the pressure on claiming the second game 15-13. Lobban looked too strong for Mangaonkar in the third game as he worked his way to claim the title 11-6.

Congratulations to all the winners and thanks to the SquashGym Palmerston North club for hosting this event.

Full game results can be found below.

Livestreaming links from the weekend can be found here Court 5 or here Court 2 or below in this article.

If you wish to watch some alternative commentary from the weekend jump over to SPALK here.