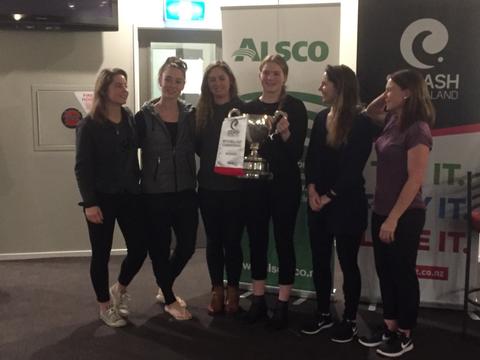 The Cousins Shield final saw fifth seeds Devoy take on second seeds and home club favorites Herne Bay A. The first match was between Jamie Oakley of Devoy and Chris Lloyd of Herne Bay. Lloyd took the first two games working Oakley hard but a lot of digging from Oakley saw him manage to grapple the next two games and level the score, but Lloyd kept fighting and took the win 3-2. The next match saw Josh Oakley of Devoy do battle with Ed Dromgool of Herne Bay. The match was full of hard hitting, quick movement and stellar pickups. Both players put everything out there and eventually it was Oakley who took the match 3-1 levelling the match score 1-1. Next up was Josh Larkin for Devoy taking on Peter Creed for Herne Bay. Creed took the game lead 2-0 and looked set to take the match but Larkin was not having any of that throwing everything on the line for his team. With some great clawing and amazing retrieval and shot play Larkin came back and claimed an exceptional match 3-2. It was down to Ben Grindrod of Devoy and George Crosby, with Crosby looking to keep Herne Bay in the running and Grindrod looking to seal it out for Devoy. Grindrod could see the title in his sites and with some exceptional work ethic he took out Crosby in 3 and claimed the title for Devoy.

The Mitchell Cup saw third seeds Thorndon take on fourth seeds Belmont Park. The first match was between Thorndon’s Debbie Dunbar and Belmont Parks Trina Moore. Both Players are experienced in teams events so pressure was never to be a problem and it was Dunbar that showed her worth taking the win 3-1 from Moore. Next up was Belmont Parks Jane Priddy against Thorndons Abby Wotten. Both players worked hard and moved the ball around the court. There was a brief break for injury in the second where Wotten was accidentally hit in the face, however Wotten used this to fire her up and after an intense five setter Wotten took the match 3-2 and the lead for Thorndon extended to 2-0. Next on was Rebecca Barnett of Thorndon and Jemyca Aribado of Belmont Park. This was another match going down to the wire and whilst Barnett took the lead on games early on Aribado kept fighting to the end to keep Belmont Park alive. Aribado clinched the match 3-2 and the match score went 2-1 to Thorndon. Next up was long time Mitchell Cup supporter Jo Shanks playing for Thorndon who was taking on Belmont Parks Juee Bhide. The Mitchell Cup had long alluded Shanks and she was looking to change that today having not lost to Bhide on previous occasions. There was plenty of powerful pay from the women and with a tight third game Shanks fought her way back to claim the match in 3 and her first Mitchell Cup.

Thanks to the Herne Bay Ponsonby Racquets Club for a great event and for hosting the teams, as well as the support from North Shore Squash Club with overflow.

Full match results and games can be found here.

Updated draws can be found on the event page here.