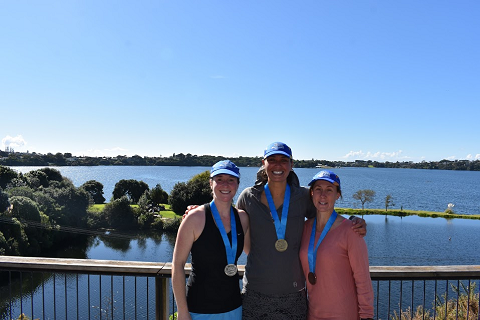 Hosts New Zealand claimed the lion's share of the Squash titles in the 2017 World Masters Games, described by International Masters Games Association President Kai Holm at the Closing Ceremony in Auckland as "the best Games ever!".

The Games featured 28 sports (including 45 disciplines) across 48 venues - with squash boasting over 400 competitors taking part in 18 events, from Over-35 to Over-80 championships, at North Shore Squash Club.

Former world No.36 Kashif Shuja led the haul of Kiwi titles, the 36-year-old from Palmerston North winning the Over-35 gold medal after beating fellow countryman Sam Atkins in the final.

Australia success was led by legend Sarah Fitz-Gerald, the five-time World Champion and former world No.1 from Melbourne who secured the Women's Over-45 title after beating local hope Lisa Cowlard in the final.

On receiving her gold medal, the 2002 Commonwealth Games gold medallist and reigning World O45 champion immediately jetted to Finland where, as a recently elected World Squash Federation Vice President, she attended a Federation board meeting.

There was success for South Africa in the Men's Over-50 event where record six-time World Masters champion Craig van der Wath fulfilled his seeding by winning the gold medal.

Canada claimed gold in both the Men's Over-70 event, courtesy of Gerald Poulton, and in the Women's Over-65 event after Laura Ramsay upset Australian favourite Sue Volzke in the final.

The most senior title was won by one of two gold medallists from England. Ultimately only two players competed in the Men's Over-80 championship - and, after two victories over New Zealand rival Trevor Coulter, it was 82-year-old Englishman Malcolm Gilham who was declared the undisputed winner - adding to the World O80 Masters title the Suffolk octogenarian won last year in South Africa.