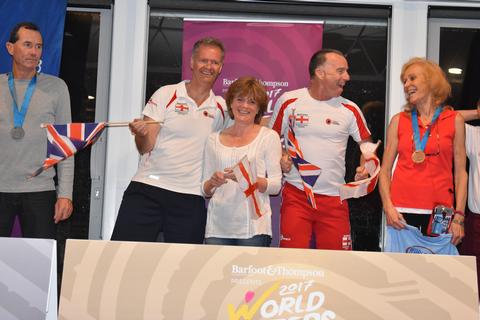 After 8 days of intense competition at the North Shore Squash Club the Teams Champions have been crowned and the World Masters Games 2017 squash event has wrapped up. The final medals of the squash event for the teams competition were presented by Susie Simcock World Masters Games 2017 ambassador and ex-WSF president on Saturday night at the North Shore Squash Club.

In the 35+ Recreational Team Tahiti (Herve Roignant, Phillippe Rougier, Beatrice Villa) proved to be too strong for their competitors winning all of their ties and claiming the title. The silver medal went to the Melbourne All Stars (Gillian Diggle, Melanie Runciman, Luke Weir) whilst bronze went to Gulf Harbour Social Squash (Allison, Bailie, Clayton Bailie, Gary Catlin, Simon Rutten, Penny Small). The silver and bronze medals were tightly contested going back to a countback to determine the winners!

In the 35+ Open Rossins Rebels (Neil Rossin, Trina Moore, Gary Duberly, Shelley Kitchen) took out Pool A and then went on to take out the winners of Pool B Yellow and Black (Paul Gardiner, Corey Love, Juli Voykovic, Todd Wilson) to claim the gold medal. It was The Young Ones (Diane Antonsen, Lawrence Malan, Dale Robbins, Daniel Woolbank) who secured the bronze position over Team Decrepit (Clark Ellery, Erin Ellery, Adrian Mennell) in a tight 2/1 win.

In the 45+ Recreational it was a three way count back for the top 3 teams and it seemed it could go any way. It was Naked Hernia Squash (Conrad Jones, Paul Raynes, Richard Shera, Mark Smith, Rachael Utumapu) that took the win on a nail biting count back whilst Squash Logic 1 (Alan McRorie, Garry Pirie, Janet Simpkins, Rodney Simpkins, Robert Sims) took out the silver and Team Tuche (Cedric Still, Christophe Ringuenoire, Jeff van Driel, Heather Scott) took out the bronze.

It has been a great 8 days of squash with all matches being played in great spirits. We would like to extend our thanks to the North Shore Squash Club for hosting the event and all the volunteers and other personnel who have made the event an exceptional one.

If you wish to catch up on the results from all of the matches check out the draws here. For any information on the event and all the media releases check out the Squash New Zealand website here.