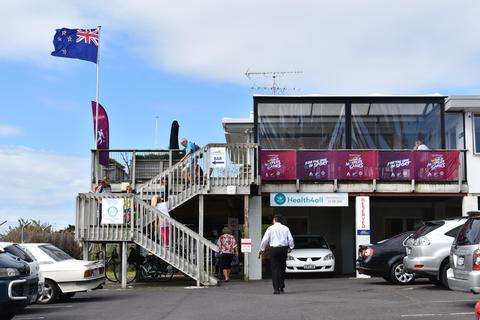 With one more day of the World Masters Games at the North Squash club the final day is sure to bring lots of excitement as the teams battle it out for the top spots in their draws.

In the 35+ Open Pool A Rossins Rebels (Neil Rossin, Trina Moore, Gary Duberly, Shelley Kitchen) and the Young Ones (Diane Antonsen, Lawrence Malan, Dale Robbins, Daniel Woolbank) will be battling it out for top spot of the pool. The winner of the pool will play a crossover final with the winners of Pool B for the title. Both teams are guaranteed a top two placing having won all of their games to date. In Pool B it is Yellow and Black (Paul Gardiner, Corey Love, Juli Voykovic, Todd Wilson) and Team Decrepit (Clark Ellery, Erin Ellery, Adrian Mennell) that are battling it out for the top spot with both teams having also won all of their match ups to date. It is sure to bring a lot of excitement tomorrow as the teams prepare for the final.

The Pool Play of the Rec 35+ sees the draws wide open with Team Tahiti (Herve Roignant, Phillippe Rougier, Beatrice Villa) having won 3 of their ties so far. If they can take out Fenua Team (Oliver Bioteau, Lionnel Garcia, Rebecca Morelle) then they will secure the gold and it will be down to the Melbourne All Stars (Gillian Diggle, Melanie Runciman, Luke Weir) to secure a win over Gulf Harbour Social Squash (Allison, Bailie, Clayton Bailie, Gary Catlin, Simon Rutten, Penny Small) to secure their second place.

In the Rec 45+ Pool Play Team Tuche (Cedric Still, Christophe Ringuenoire, Jeff van Driel, Heather Scott) are on track to claim the title, however Naked Hernia Squash (Conrad Jones, Paul Raynes, Richard Shera, Mark Smith, Rachael Utumapu) will be looking to foil their plans if they get their way and they can claim their 2 matches today.

In the Rec 55+ Odds & Sods (Rod Clarke, Sarndra Kennedy, Kay Baldock, Ruth Farr) and Vikings from the North (Sven Lilja, Peter Lindja, Jane Mackie, Christine Cooper) have yet to drop a tie. They will be looking to continue in strong form over the next day to take the win with both teams facing off at 5pm on Saturday.