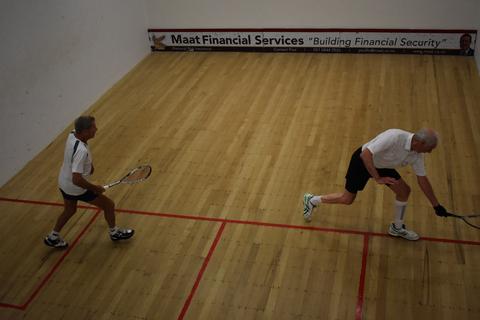 The fourth day of the World Masters Games has wrapped up at the North Shore Squash Club and there will be a number of titles to be had over the coming days. Some of the top seeds are finding strain on their bodies and will have to put this aside if they want to claim their titles.

The all Kiwi Finals will see ex professional player Kashif Shuja take on second seed Sam Atkins whilst fifth seed Adrian Mennell and third seed Neil Rossin will battle it out for the 3/4 position. All players had a day off on Tuesday and will be well rested for their final matches.

The top seeded Kiwi Corey Love took out a big win over the fourth seed Richard Green of the UK in 4 with Love putting aside any injuries he may have been carrying to secure his place in the final. Third seed Allan Crome made it an all Kiwi final after taking out his win over Australia’s second seed Daniel Woolbank in 3. Woolbank and Green will do battle for the 3/4 position.

The Men’s 45+ saw top seed Scott Gardiner of NZ having to retire injured against NZ’s Robert Clark after doing his quad muscle. Clark will now do battle against the second seed Paul Bedford who made his way into the final with a win over another Kiwi Troy Dunn the sixth seed. Bedford claimed his win in 3 over Dunn to make the final. Dunn now takes the 3rd place medal with Gardiner unable to compete in tomorrow’s scheduled match.

Top seeded South African Craig van der Wath made light work of local club player and fifth seed Gary Duberly with van der Wath taking the win from Duberly in 3, with Duberly just not able to match the accuracy and shot selection of van der Wath. Canadian and second seed Steven Wren made his way into the final beating New Zealand’s Grant Craig in 3. All medals in this draw will be heading to different parts of the world with a truly international draw.

Top seed Peter Gilbee of Australia made his way into the final with a win in 3 over the fourth seed Antony Brettkelly of the USA. Second seed Dale Robbins of Australia made sure that Australia would get a title in this event when he took out sixth seed Mark Taylor of the UK in a tough four setter. The 3/4 battle will see a Trans-Atlantic battle with Antony Brettkelly of the USA taking on Mark Taylor of the UK.

Top seed and local club player Mark Waldin will do his best to ensure that the North Shore club sees a title staying in the building after he took his win from fellow Kiwi Lawrence Skurr in 3. Australian Roy Oliver has made the final a Trans-Tasman affair after taking his win from the New Zealand Masters Director Wayne Seebeck in four sets. This will now see local club mates Wayne Seeback and Lawrence Skurr battling it out for the 3/4 spots.

Top seed Hongi Laing of New Zealand has made his way into the finals with a strong win over New Zealand’s Ross Cornes in 3. Laing will be joined by sixth seed Ross Wells of New Zealand who upset the 2016 NZ Masters Champion Trevor Colyer in 4 to claim a space in the final.

Pool play kicked off again in the 70+ category with the Kiwis taking their wins from the Australians in contrasting styles. Stephen Jacobs took out Michael Millington in 5 whilst Alex Houliston took out Max Bourne in 3. There is 1 more day of Pool Play for the 70+ Men before their final day.

The Men’s 75+ start up again for their Pool Play on Wednesday with their final games schedules for Thursday afternoon.

Malcolm Gilham of the UK has secured his win over Trevor Coulter of New Zealand by beating him for the second successive time in this event. Gilham and Coulter will take to the court again on Thursday before their medal ceremony.

The Men’s Recreational Finals and 3/4 Playoffs are as below:

Top seed and former World Number 6 Shelley Kitchen took another win today over Toni Horsman from NZ in 3 whilst Australia’s Diane Antonsen took her win over South Africa’s Tracy Browne in 3. The final day of matches kicks off on Wednesday with Jo Shanks and Shelley Kitchen topping the leader board at the moment.

It was a recuperation day for the Women’s 40+ with the finals set for Wednesday with a guarantee of a Kiwi title and all medals staying in NZ.

Five times World Champion Sarah Fitz-Gerald the top seed from Australia took her win from Kiwi player and fourth seed Tanya Laurence in 3 to claim her spot in the final. Local club mates from the North Shore Squash Club Lisa Cowlard (second seed) and Mandy Kennedy (third seed) had a good battle on court but it was Cowlard who took the win in 3 and secured a spot in the final.

Top seed Susan Hillier of Australia carried on her winning ways with a win in 3 over New Zealand’s Annie Hall to secure her place in the final against South Africa’s Angelique Clifton Parks. Clifton Parks the second seed took her win from New Zealand’s Kathryn McKay in 3.

The Women’s Open 55+ had the day off before they take on each other in their respective finals on Wednesday.

The Women’s 60+ were also relaxing today with their finals scheduled for Wednesday afternoon.

The Women’s 65+ saw top seeds Susan Volzke of Australia and Laura Ramsay of Canada take out their Kiwi opponents Judith Orr and Gwen McGeown in 3 sets to claim their place in the final. These players will find out their champion on Thursday morning.

There were no matches for the 70+ Women today with their next round of Pool Play starting on Wednesday night.

The Women’s Recreational Finals and 3/4 Playoffs are as below:

Entry is free for spectators all week at the North Shore Squash Club and you can view all the draws (including the Recreation draws for each age group) and follow the action as it happens at www.northshoresquash.co.nz. The individual competition will continue through until Thursday and will be followed by the Teams competition from Thursday to Saturday.