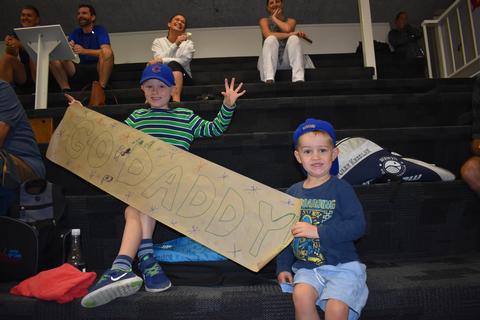 The 2017 World Masters Games is well underway with many of the Quarter-Finals and Semi-Finals being determined and for the 430 participants competing in squash they are starting to show off all of their hard training.

The first round of matches began 8am Saturday morning, with the individual competition set to run over the next five days with finals for all age groups scheduled for either Wednesday or Thursday. The Teams event will kick off on Thursday and finishes on Saturday.

The Men’s Open 35+ draw saw one upset in the first round with 13th seed Allan Robinson managing to get the victory over his 4th seeded opponent Harjinder Singh. The semi-final will be an all-kiwi affair. Former world top 40 player and top seed Kashif Shuja (NZ) will face fifth seed Adrian Mennell (NZ), while in the other semi third seed Neil Rossin (NZ) will take on second seed Sam Atkins (NZ).

The Men’s 40+ Open draw sees seven of the top 8 seeds through to the quarterfinals. With 6 New Zealanders, 1 UK and 1 Australian this draw is sure to get the locals excited. The 40+ is spearheaded by top seed Corey Love and second seed Daniel Woolbank of Australia.

The Men’s 45+ Open draw were the first to hit the court at 8am Saturday morning. The 64 draw has played out to its seeding so far with all the top eight seeds progressing through the first three rounds and into the quarterfinals, which will be played at 3.30pm Monday. Australia’s Tim Bateman will be among 7 other kiwis in the Quarters after sneaking past Michael Flood-Smith (NZ) in a five-setter. The only other round of 16 match to get past three games featured Stephen O’Toole (NZ) just managing to overcome Bruce Smith (NZ) in five.

The Men’s 50+ Open draw looks to be one of the feature draws of the event with current 50+ world Masters champion Craig van der Wath the top seed alongside former world champion and North Shore local Gary Duberly. As with the other draws however it has played out to seeding so far with all top eight seeds into the quarterfinals.

The Men’s 55+ Open has a truly international flavour to it. All the top seeds have progressed to the second round of matches in the 64 draw with the quarterfinals scheduled for Monday evening at 6pm. Tenth seed Martin McKelvie (NZ) has managed to upset seventh seed Cameron Anderson (Australia) in five to book his place in the quarterfinals.

The Men’s 60+ Open draw has completed two round of matches with two upsets coming through. North Shore local Mark Waldin leads the charge as the division’s top seed, but will face plenty of stern competition along the way. It was Malawi's Gordon Benbow that upset 5th seed Lawrence Malan to book his place in the quarter finals and Trevor Harvey who took out Robert Sims.

The Men’s 65+ Open draw saw tenth seed James Leddy (NZ) managing to get the victory over seventh seed Paul Devoy (NZ). NZ’s Hongi Laing takes the top position in the draw but will have to contend with a possible final showdown against former world Masters champion Trevor Colyer (NZ).

The Men’s 70+ Open draw had a series of play-in matches Saturday afternoon to decide which players progressed to the championship round robin draws. The division is led by Canadian top seed Gerald Poulton who will no doubt be in the sights of Kiwi Graeme Richardson who takes second seed .

The Men’s 75+ Open draw sees New Zealand racket sport legend Richard Purser as top seed in the round robin event. The first round saw Purser claim a 3/0 victory over Mike Grant (NZ) while in the other match Thomas Slattery (Australia) took a first-up win over Desmond Succo (SA).

The Men’s 80+ Open draw has only two players left standing due to the withdrawal of Australia’s Kenneth Rathgen leaving NZ’s Trevor Coulter and England’s Malcolm Gilham to face each other for the title.

The Women’s 35+ Open is highlighted by the entry of former world #6 and current Squash NZ High Performance Manager Shelley Kitchen. Second seed Jo Shanks (NZ) has had two wins whilst Kitchen has won her single match so far. The round robin draw is sure to see some good match ups over the coming days.

The Women’s 40+ Open draw saw no upsets in the first round but it was local Michelle Heron who upset higher seeded Erin Ellery to claim a spot in the semi-finals.

The big drawcard for the competition is World Masters Games ambassador and 5x World Champion Sarah Fitz-Gerald of Australia. She will meet Sam Godfrey (NZ) in the quarterfinals at midday Monday after Godfrey defeated eighth seed Tracey Flux (NZ). The only other unseeded player to make the quarters was Shari Ball (NZ) who had a 3/0 win over Claire Kluyver of the Cayman Islands.

The Women’s 55+ Open also has seen all but one of the top four seeds make it through to the semi finals with some tough battles along the way. Christine Ewart took out Mary Turnbull the fourth seed in 3 to secure her place in the semis.

The Women’s 60+ Open has all run according to seeding so far with 3 Australians and 1 New Zealander left standing. The semifinals will be played on Monday evening.

The Women’s 65+ Open followed suit with the top 4 seeds progressing to the semi-finals with Australia’s Susan Volzke, a former world Masters champion as the top seed.

The Women’s 70+ Open will be played out over a round robin, with top seed Kaye Jackson (NZ) taking a 3/0 victory in her only match so far. Second seed Patricia Taylor (NZ) has also started convincingly with two 3/0 wins to begin her campaign.

Entry is free for spectators all week at the North Shore Squash Club and you can view all the draws (including the Recreation draws for each age group) and follow the action as it happens at www.northshoresquash.co.nz. The individual competition will continue through until Thursday and will be followed by the Teams competition from Thursday to Saturday.