We're Ready, Bring on the Games 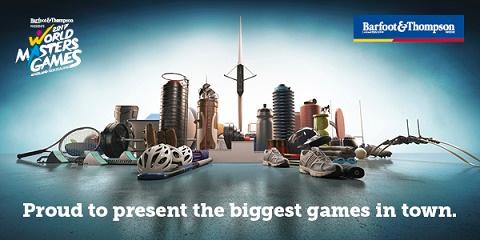 “With 25,000 athletes competing in 28 sports across 48 venues it’s been a massive logistical challenge but we are ready and we couldn’t be more excited as we look forward to the next 10 days,” Ms Wootten says. “Bring it on!”

International Masters Games Association Chief Executive Jens Holm says, since awarding hosting rights for the 2017 Games to Auckland, his organisation has worked closely with the Local Organising Committee every step of the way.

“We are very impressed with the detailed planning and preparation that has gone into these Games. Everything points to a wonderful World Masters Games in Auckland,” Mr Holm says.

Ms Wootten says Eden Park will be buzzing during the Ceremony, which is for registered participants only, and not open to the public.

Athletes in the parade will march by sport. This is a tradition as competitors represent themselves not their country. WMG2017 today announced the names of the standard bearers for each sport, a list which features athletes from 10 different countries aged between 30 and 89.

Former New Zealand Davis Cup representative James Greenhalgh is the standard bearer for Tennis and says he is excited about the opportunity to fly the flag for his sport at the Opening Ceremony.

“Tennis is a truly global sport with players coming from all around the world for these Games. It’s a great honour for me to be the standard bearer and lead the players of the sport I love.”

Wellington teacher and basketballer Monica Mercury will be in the spotlight at the Ceremony as she reads the Athlete Oath on behalf of all WMG2017 competitors.

“I’m more used to standing in front of a class of school pupils than a crowd of 30,000. Reading the athlete oath on behalf of athletes from more than 100 countries is a tremendous honour and a privilege,” Ms Mercury says.

With a crowd of up to 30,000 expected at tomorrow’s Opening Ceremony, Auckland Transport has worked with WMG2017 to ensure participants get to and from Eden Park smoothly.

“We’re advising all participants to use the public transport services provided as parking near the venue is limited. And our message is plan to get there early as peak travel times will be busy,” Mr Strawbridge says.

Around 75% of Games participants hail from outside of the host city and Ms Wootten is promising a warm welcome from Aucklanders.

“Being great hosts and making visitors feel welcome is in our blood. It’s something the city did brilliantly during Rugby World Cup 2011 where visitors went home raving about their experiences in our city and country. I’m confident of a repeat performance.”

Ms Wootten says the public are an important part of WMG2017 and the Queens Wharf Entertainment Hub is the place for Games participants and Aucklanders to get together and mingle. The Entertainment Hub is open every day of the Games from Saturday 22 April and admission to most activities is free.

“One of the unique attractions of World Masters Games is the social side of the event, and there is a great history of lifelong friendships being formed at previous Games,” she says.

“As the host city in 2017, Auckland is embracing that tradition and laying on a feast of culture, performance, music and food on our waterfront.”

Highlights include Toi Ora, a living gallery, in The Cloud to showcase traditional Māori arts and culture. There will be music and entertainment day and night featuring, amongst others, Tami Neilson, Will Crummer and the Rarotongans (featuring Annie Crummer), Motor City Family Funk, The Warratahs, and LatinAotearoa.

The wharf will also feature the best of New Zealand’s cuisine and beverages, from the likes of Good George Brewing, Villa Maria and The Kitchen c/o SKYCITY. There is also a daily sports wrap from the Games at 7pm and the Barfoot & Thompson Kids’ Fun Zone.

The detailed programme is available at www.worldmastersgames2017.co.nz

There is also no charge for admission to any of the Games 48 competition venues and spectators are welcome, though entry is subject to venue capacity and registered participants will be given priority.

The World Masters Games is the largest multi-sport event in the world.  In terms of athlete numbers, it is bigger in scale than even the Olympics.  Auckland will host the event from 21 to 30 April 2017 during which time more than 28,000 participants will compete in 28 sports across 48 competition venues.  The Games are regarded as the largest event New Zealand will host in at least the next decade.  For more information visit www.worldmastersgames2017.co.nz.

WMG2017 seeks to deliver $30.8 million GDP and 244,000 visitor nights to Auckland’s economy and $53 million GDP and 266,000 visitor nights to the wider New Zealand economy. The Government ($11 million) and Auckland Tourism Events and Economic Development on behalf of Auckland Council ($11.75 million) have invested approximately two thirds of the $35.85 million required to stage the event with the remainder to come from registration fees ($8.5 million) and commercial sponsorship ($4.6 million).

Barfoot & Thompson is the presenting partner for World Masters Games 2017.  It is New Zealand’s largest, privately owned real estate company and is still run by the Barfoot and Thompson families after more than 90 years.  Barfoot & Thompson consistently sells around one in three homes in the Auckland region and manages more than 11,000 rental properties, well ahead of competitor brands.  For more information visit www.barfoot.co.nz.