Coll Goes Down in 5 to Elshorbagy 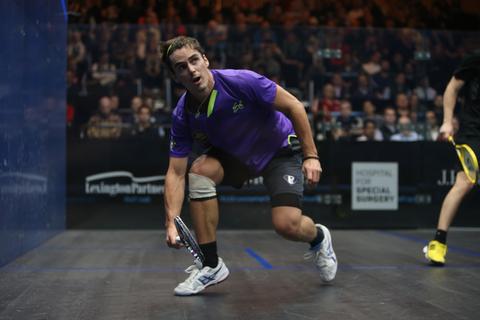 The first game went point for point between Coll and Elshorbagy with players trading shot for shot and playing some superb winners. Coll held the first game ball but was unable to convert the game, eventually Elshorbagy clawed back and took the first game 15-13 with unforced errors creeping into Coll’s game.

The second games saw Coll take a quick lead but Elshorbagy stormed out to a strong lead. Coll was not able to find his rhythm and shots in the second and it looked to be over. Coll however looked set to make a come back late in the game, but it was not meant to be with Elshorbagy closing out the game 11-6 and taking a two game lead.

Coll came out strong in the third game and took an 8-1 lead, but Elshorbagy fought back and drew ever closer to Coll. This time though Coll held strong and took the third game 11-8.

Elshorbagy took a convincing lead in the fifth and whilst Coll threw everything he could on the line at times it was not meant to be his day as Elshorbagy took out the fifth game 11-7 and he claimed the match 3-2.

Campbell Grayson was also competing in the main draw today taking on World Number 26 Cesar Salazar from Mexico. Whilst Grayson seemed to be in the match at points it was not enough to take the win with Grayson going down in 4 (4-11, 11-7, 8-11, 4-11).

Joelle King will be competing in her first round of the main draw tomorrow against Canadian Samantha Cornett.

Paul Coll’s match was streamed on Squash TV. Sign up to Squash TV here using the promo code NZ50 to receive 50% off your first 3 months.