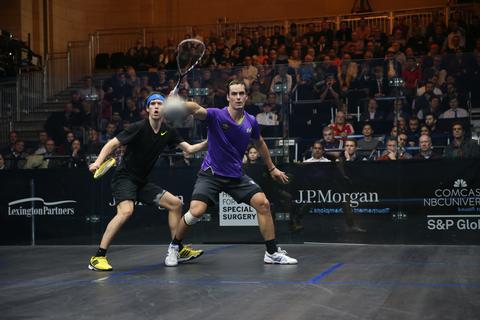 Joelle King and Paul Coll are set to make their mark on the 2017 Windy City Open being held in Chicago. Whilst King and Coll are straight into the main draw Campbell Grayson has to make his way through qualifying to join them.

Gryason has started off strong in qualification defeating Babatunde Ajagbe of Nigeria in straight sets (11-4, 11-5, 11-7) to proceed to the final round of qualifying. Grayson will now play local American player and WR#49 Todd Harrity to try and secure his spot in the main draw.

In the Men’s Main Draw Paul Coll will face current World number 1 Mohamed Elshorbagy in the first round of the event. Elshorbagy will be looking to show a strong performance after losing out to Gregory Gaultier in 5 at the Tournament of Champions in the Semi-Finals. This will be Coll’s first time playing the World Number 1.

In the Women’s Main Draw Joelle King will face a qualifier in the first round, where if everything goes to seeding she will face Laura Massaro for the second tournament in a row. King lost out to Masssaro in 5 at the Tournament of Champions and she will be looking to seek her revenge.

Paul Coll’s match will be streamed on Squash TV at 1pm on Friday 24th February. Sign up to Squash TV here using the promo code NZ50 to receive 50% off your first 3 months.