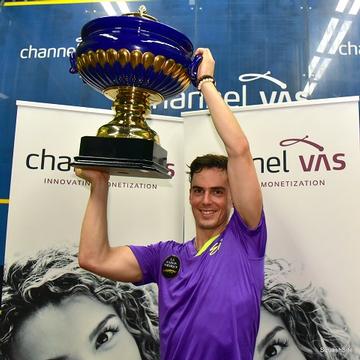 New Zealand national champion Paul Coll added another honour to his ever-growing list when he was named as Squash Player magazine's Most Improved Male Player of the Year for 2016.

The 24-year-old from Greymouth, who rose to a career-high 16th in the world rankings in February, rounded off a superb year by winning the $100,000 Channel VAS Championship in England, the biggest title of his career.

The citation read: "Surely most observers will not deny Paul Coll, the New Zealander based at Amsterdam’s Meer Club, victory in this category. At one stage Coll seemed to be best known for an endless succession of YouTube virals for his exuberant and athletic diving on court, but he was propelled further into the limelight when he lifted the $100,000 Channel VAS Championship in Surrey in December as a qualifier in front of his great compatriot, Ross Norman."