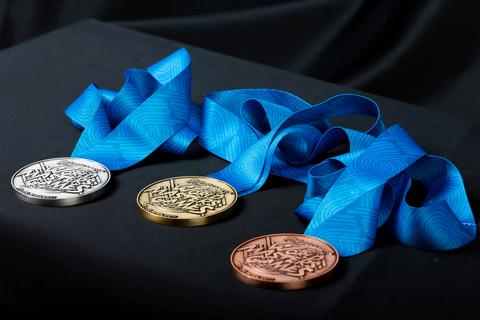 The gold, silver and bronze medals that Squash Players will compete for at World Masters Games 2017 (WMG2017) have been revealed for the first time.

Designed and produced by the company responsible for medals at the Sydney 2009 World Masters Games, each prize medal – at 70mm in diameter and weighing approximately 135 grams – showcases the Games logo that incorporates the unique takarangi (spiral) designed by Graham Tipene for WMG2017.

WMG2017 Chief Executive Jennah Wootten says if squahs players and other athletes needed any further incentive to sign up or get training for the Games, the impressive sight of the medals on offer should provide it.

“This is a once in a lifetime opportunity for squash players of all ages and abilities to compete in a global event against athletes of similar ability for medal honours. Not every squash player will win a medal, and perhaps not every competitor is striving for one, however we wanted to create a symbol befitting the achievement of those that do.”

“Along with the memories the squash players will create along the way, the medals will be lifelong mementoes of their achievements at the Games.”

The medals are expected to be handed out at more than 3,000 medal ceremonies during the Games.